The Search for Planet X 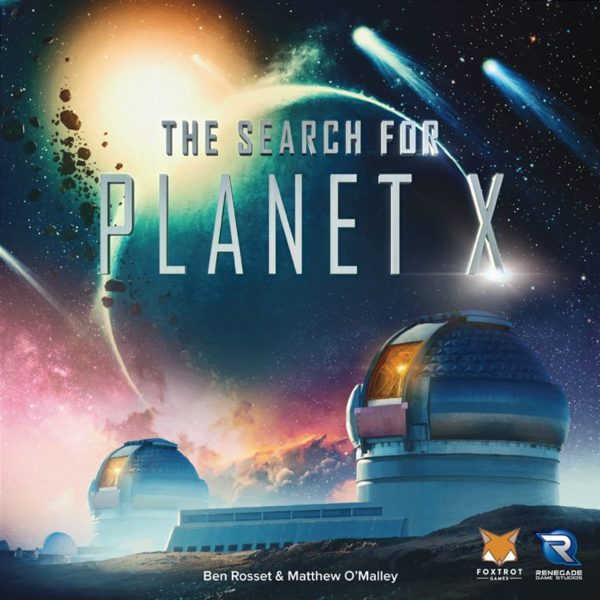 Since 2016, astronomers have been searching for a distant planet to explain the unique orbits of observable objects in the solar system.

Do you have what it takes to find Planet X?

Alpal has been talking about how much she has been enjoying The Search for Planet X. It was a game that had dropped off my radar quickly. I remember looking forward to it coming out, but was swallowed up by lockdown being announced all over the world. Luckily Alpal didn’t forget about it, and made the comment that she needed to send it to me to play. Being a logic puzzle, she thought The Search for Planet X would click with me.

It’s not often Alpal makes a comment about ‘making me’ play a game. When she lived up here, I would go to her place to find the game setup and ready to play. I can’t think of any game setup like this I haven’t enjoyed. So when I was looking for Century Golem games, I added Search for Planet X to my cart. I am glad I did!

The Search for Planet X is a deduction logic puzzle. Think Cluedo (Clue for the US) but on a larger scale. There are sectors each with a single astral phenomenon. Sectors can contain asteroids, dwarf planets, or nothing at all. Ultimately, you are looking for the mysterious Planet X. Search the skies!

As The Search for Planet X relies a lot on hidden information, the board isn’t anything special. Don’t get me wrong – it’s a nice board, with some pretty artwork. It’s just not a board that will rope in anyone walking past. The bulk of the game happens on player cards, where you take notes and try to logic out what is where in the universe.

This brings me to one aspect that is divisive in the board game community – Search for Planet X is driven by an app. When you start a game, you can use the phone app or website to sync a 4 letter code to the same game. Then on your turn, you enter your action (research, survey, target etc) and the app reveals to you what you found. Take the note, clear the screen, and pass it on.

It doesn’t sound exciting, and ‘logic deduction’ can put players off as complicated. I haven’t even touched on scoring, which is the hardest aspect to convey. So app-driven, looks complicated, no visual hook? A lot of players will overlook Search for Planet X out of hand, which is unfortunate.

I had a ball playing Search for Planet X. And it was our most complicated setup for games day. I streamed the board on Discord for everyone to see, laminated some cards for Rabbit and I (Alpal has her own) and we all had the app. It worked well playing remotely over Discord.

I found Planet X first, but the scoring (that I haven’t touched here) meant Alpal wrecked me score-wise. It was still a lot of fun. Rabbit didn’t have as much fun, but by her own admission, she just may not have been in the mood. I thought she would have a ball, with games like Dinosaur Tea Party clicking with her so well. But Dinosaur Tea Party has a lot of eye candy to draw you in and doesn’t require extensive note-taking.

This is bought up because it feels like you will either enjoy Search for Planet X, or you won’t. It doesn’t feel like there will be much middle ground for players here. I enjoyed it, Alpal enjoys it, but Rabbit I think will mostly sit out.

You may notice I haven’t gone into too much detail on the game itself today. Without going into a lengthy explanation, I can only really say I enjoyed it, and will likely play Search for Planet X solo soon. When I do, because I set up to stream the game for us to play, my plan is to make a solo playthrough video for YouTube.

Here I can go through a lot more in detail, and you can see if you might enjoy Search for Planet X yourself. Or maybe even the follow-up Search for Lost Species, coming out later this year. Lots of fun stuff to look forward to!