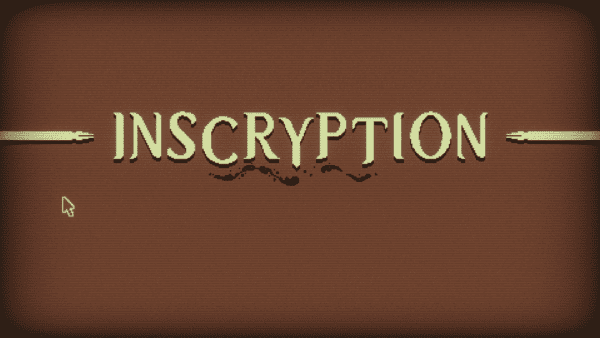 Inscryption is an inky black card-based odyssey that blends the deckbuilding roguelike, escape-room style puzzles, and psychological horror into a blood-laced smoothie. Darker still are the secrets inscrybed upon the cards...

Last year, a friend of mine Cactigh introduced me to Inscryption during one of his streams. I started playing alongside him, and quickly became obsessed. So obsessed, that I had to uninstall the game on my PC because I would keep playing instead of working.

Describing Inscryption is an interesting proposition. It’s a collectible deckbuilding card game. At least, to begin with. Then there is an escape room puzzle element, an NES-style RPG, an ARG, rougelite, and a mystery – all in one. But you don’t know that up front. If Inscryption hadn’t come out last year I wouldn’t be talking about any of the later elements.

Inscryption is a puzzle gamer’s bread and butter. Everything about the game is a puzzle, and a major puzzle is which layer you are currently working on. It doesn’t make a lot of sense if you haven’t played the game, and it can sound like way too much to jump into. But it works, because you can play only the ‘surface layer’ of Inscryption, or delve deep into the game.

It does look like a steep learning curve to Inscryption. You do not start a new game, but continue a game already in progress. You then play against a barely seen opponent, and eventually lose. The loss isn’t scripted, but you are trying to work out the rules as you go. And when you lose, there is an interesting price to be paid…

Defeating Leshy allows you to actually start a new game. This is where the RPG element comes in, and where the story begins to unfold for the player. You can follow the dots as a simple RPG, similar to Pokemon. Or, you can start finding secrets and exploring not just within the game, but other places as well.

As an example, think Doki Doki Literature Club. That should be enough of a hint for anyone interested. 🙃

I am currently in the middle of Act 3 of 4. Looking at the trophy list, it seems all the post-game changes are included on PlayStation. I don’t know if I will Platinum Inscryption, but I am going to enjoy finishing it again!

If your curiosity is peaked at all, check any YouTube playthrough from the start of the game. Watch the first 30-40 minutes, and if you aren’t hooked you won’t be. But if you are, and find yourself noting plays or wanting to investigate little things, pick up Inscryption. You will be glad you did.

Coming home from PAX, I sat down and thought that some more Inscryption would be fun. I hadn’t had a chance to play as I don’t take my PlayStation with me on holidays, and I new I was nearing the end.

What I didn’t realise is how close to the end I was! I only needed to activate two more portals, and then I triggered the endgame!

So right now I am going to be intentionally vague. The events in Inscryption both in-game and augmented reality deserve to be experienced. With no advance warning, it’s fair to say you won’t see the end coming.

Now that I have finished the main game, I am happy to put Inscryption on my ‘Finished’ games list. That doesn’t mean I am finished with it though. Because now I can play Kaycee’s Mod, and experience Inscryption in new ways. Or so I am told.

I will likely plug away at Inscryption like how I am with Burnout 3 and Pixeljunk Monsters. Little by little, I will make my way through the DLC and see how it goes. Now the only real question is do I want to try and tackle the Platinum?