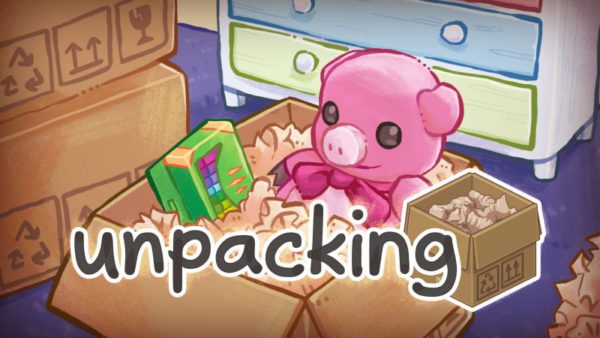 Unpacking is a zen game about the familiar experience of pulling possessions out of boxes and fitting them into a new home. Part block-fitting puzzle, part home decoration, you are invited to create a satisfying living space while learning clues about the life you’re unpacking. Over the course of eight house moves, you are given a chance to experience a sense of intimacy with a character you never see and a story you’re never told.

Last year, Unpacking was a surprise smash hit. It won a heap of awards from the Australian Game Developer Awards up to the BAFTAs. After watching some of my favourite YouTubers relaxing their way through the game I can see why. Having Xbox Game Pass, Unpacking has been on my ‘One Weekend’ list for ages. Last week, I finally got around to trying it out.

The path to trying it out though has been interesting. As I mentioned, Unpacking is on Game Pass. I could have played it on Xbox at any time. But Sony recently had a sale, and I picked up Unpacking for PlayStation on sale. Why? I wish I could tell you. I’m going to say I was worried it would rotate out of Game Pass. Sure, that’s it. It’s not like I could have fired it up at any point while it was on Game Pass at all!

But Monday night, I wanted to play something but didn’t want to start a bigger game before Stray came out. I really need to go back to Horizon Zero Dawn at some point. I am worried I will have to restart it at this stage. My video games backlog challenge has not helped any of them get played either. Yikes. This kind of thinking started me down a depressing path. That’s why Unpacking jumped up as the perfect choice!

I will say I am not playing Unpacking ‘properly’. By this, I mean I have turned off the puzzle aspect of the game. Under accessibility, there is an option to ‘Allow Items Anywhere’. This means I don’t have to put things where the game wants them, but I can build my own mini-narrative for the game. After having watched the game for about 12 hours on YouTube, I have watched a lot of the ‘puzzle’ being worked out. So, I set myself up for a bit of fun.

It was a chill time, pulling stuff out of boxes and finding places to put them. I know a few people that pack like the original box packers as well. Why put a pair of shoes in the same box, when you can put each shoe in random boxes? Box destined for the bedroom? Let’s put kitchen electrical items in there!

I have only unpacked the first two years in Unpacking, so I have a fair bit to go. It’s going to be interesting to see how everything comes together. Rabbit might even enjoy watching this one with me. That might lead to some arguments about where things live though! 😋

It might be a few weeks before I come back to Unpacking, but to sit and unwind I can’t think of a better game at the moment. It might sound strange, but I get the same sense of relaxation and ‘zen’ focus as when I played Elden Ring. I find it funny that two so different games can allow me to have the same relaxed feeling. That’s what makes games so awesome though!