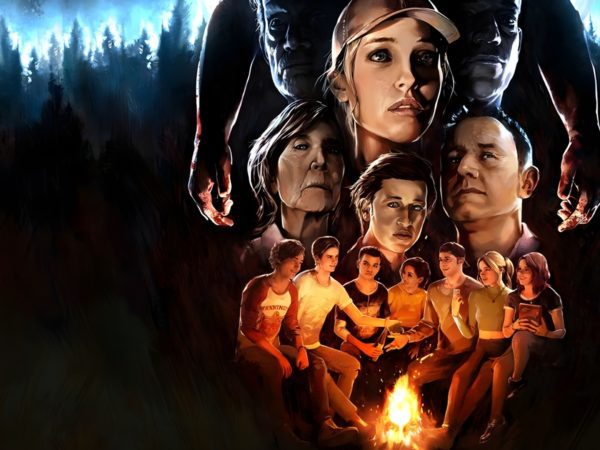 The Quarry follows a group of nine teenage counsellors stranded at Hackett's Quarry on the last day of summer camp. Featuring an ensemble of Hollywood stars and horror legends, including David Arquette ("Scream" franchise), Ariel Winter ("Modern Family"), Justice Smith ("Jurassic World"), Brenda Song ("Dollface"), Lance Henriksen ("Aliens"), Lin Shaye ("Insidious" franchise), Ted Raimi ("Creepshow") and more, players play as each of the nine camp counsellors in a thrilling cinematic tale, where every decision shapes their unique story from a tangled web of possibilities. Any character can be the star of the show - or die before daylight comes

People who have followed me for a while know my love of Supermassive Games. Interactive movies light on actual ‘gameplay’, they aren’t for everyone. Most games have been a homage to horror and B movie classics. Their latest outing, The Quarry, is no exception.

I have on my YouTube channel some long-play run-throughs of the latest two Dark P{ictures Anthology titles. I might do the same with The Quarry, I haven’t quite decided yet. So my notes here will be a bit light, as there is a good chance you can watch me play if you like.

The Quarry is definitely for fans of late 80s horror movies. You play as a group of camp counsellors celebrating the end of camp without adult supervision. While enjoying their last night alone at camp, things take an unexpected turn.

These storylines are not super original – they aren’t supposed to be. As I said, these are homages to the old style of movies where you knew 80% of what was going to happen. Stupid decisions, common sense out the window, corny dialogue – it’s all here. The Quarry does not fail to deliver on the best and worst of this story format.

I will never understand how Supermassive games get genre favourite actors to participate. I don’t mean this as a negative – it’s something that makes games like The Quarry feel that little more ‘authentic’. A lot of the stigma of participating in computer games for actors has been lifted, but Supermassive isn’t a huge studio.

For example, in The Quarry, there isn’t a single ‘big name draw’ in the cast. Horror veterans such as David Arquette, Ted Raimi, Lance Henriksen and Lin Shaye. Sure, Hollywood A-List wise maybe not the top 1%. But for this type of campy horror film? Each is a favourite across many franchises.

I am about halfway through the 10 chapters. I got to play more than I thought I would, but less than I would have liked. I should be finished with the story mode by next weekend, so see how that goes. The only thing I can say right now is The Quarry is on form, and I am thoroughly enjoying it.

Very quick one on The Quarry this week. I got to play another couple of chapters, and if I am lucky I will get to play a couple more after I write this Sunday night.

I am up to Chapter 6, so all the setup is done and twists are starting to appear. The game enemies are no longer hinted at and are instead spelled out for the viewer. It’s the “See, there really is something very wrong here” part of the ‘movie’.

If this was an actual movie, this would be about 30 minutes into the film. With games like The Quarry, Until Dawn and similar from Supermassive, it’s about 2-3 hours in. This is part of what splits the audience for games like The Quarry. Part of the charm of B movie horror is 90 minutes give or take and it’s done.

A 90-minute game would be crucified by many players. So padding out the content can be hit or miss and has been from game to game. The Quarry seems to be hitting and Until Dawn and Man of Medan are great. That said, I haven’t had the urge to play the rest of The Dark Pictures Anthology again after the initial run.

I have been enjoying all these games, and I am going to grab the final The Devil In Me on day one. But these games are niche. They aren’t survival horror, choose your own adventure is close but not quite. An interactive movie is apt, but who wants to watch an 8-hour B-grade horror movie?

I have four more chapters of The Quarry, so I think that will be about 3 solid hours. That is because the chapters in The Quarry seem to be going for about 30-45 minutes each. Supermassive seems to be dialling in the ‘better’ length of these chapters.

With any luck, I will have The Quarry finished next weekend. Even if I don’t get to play any more this week, one big session to end it once the end of the financial year is over seems like a great goal.

Also, I want The Quarry finished so I can spend one weekend with retro gaming before Stray comes out. Guess what new game I am looking forward to next!

I didn’t get to play as much of The Quarry as I hoped this week, but I did make my way through two more chapters. The plot continues to follow the classic B movie horror formula, and I am enjoying every minute of it.

Some of my decisions have started to show their consequences. I have lost a character in a swift (and graphic) manner, where it looks like it was all the choices I made. I didn’t die because I messed up some quick time events, but because I made specific decisions. Similar to Until Dawn, The Quarry seems to be leaving the player with a false sense of security because you just watch things play out then boom – character death!

One thing that surprised me was I got a screen offering me a chance to go back and try and save them. I know this is something you unlock after you complete the story, but this is my first playthrough. Maybe it’s part of The Quarry Deluxe? I should have paid more attention. I only grabbed deluxe by mistake but kept it for the PS4 version as well.

Anyway, as I said the formulaic nature of the story is progressing well. I spoke that the enemies had revealed themselves. We know what our protagonists are facing, even if they don’t.

The elements of the story are all coming together, even though the group is starting to fall apart. The trick now is going to be keeping them together and calm. A little hard when one of their group literally lost their head.

Luckily, the owners of Hacketts Quarry and the surrounding land will surely help our heroes. Everyone seems so friendly after all!

With luck, I can have one solid final push and finish the last three chapters in one sitting. That’s something to aim for this week.

I know any Platinum considerations for The Quarry will be put off for quite some time. I need to clear the gaming schedule for Stray!