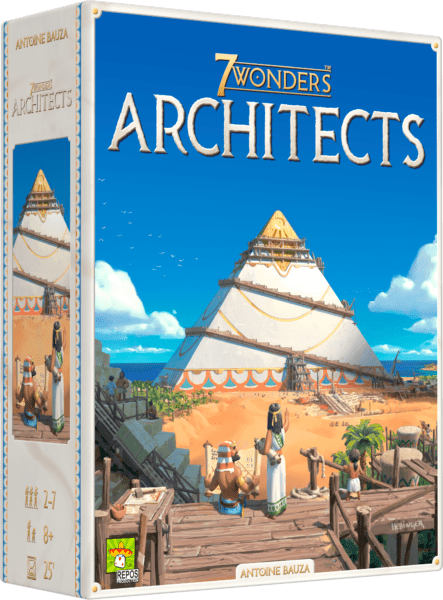 A while ago I heard about 7 Wonders: Architects. While I enjoy 7 Wonders, as I only knew the title I thought it was only an expansion. Well, Alpal knew that this wasn’t the case, and asked me to look into how to play it.

So today we got to play 7 Wonders: Architects. And play it we did! Playing on Board Game Arena means no setup or physical manipulation of the board. This means quicker gameplay and fewer rules arguments. A good implementation won’t let you break the rules.

Well on Saturday, we played 9 games in two hours. That includes a five-minute rules explanation in the initial learning game!

7 Wonders is an engine-building game at its core. Sure, you are trying to ‘build’ a wonder, research science, build armies and the like. But you do it by collecting resources and building an unstoppable engine for the end game.

7 Wonders: Architects still has you constructing a building. Instead of saving resources to use later, you spend them to complete the sections of your Wonder.

You can still build armies, research science, and optimise resource collection. The game still has you interacting with those on your left and right. But the engine building and complicated scoring paths have been replaced.

Acquiring cards is simple. Pick the top card from a pile on your left or right or the face-down ‘central’ pile that anyone can pick from. You don’t have to save up, or get specific items to build up to something else.

Resources for each section of your Wonder requires a number of resources. The only catch is that they must all match, or are all different. Gold coins are wild, and no buying from those around you.

Science has also been simplified. Get two the same or three different, and get a Science Bonus Token. Armies work almost the same. If you have more armies than those on your left or right, collect 3 VP for each side you ‘beat’.

Because there are no rounds, some army tokens have horns on them. Once three horns have been collected, war is declared and combat resolved. Simple and straightforward, but still has an element of strategy.

If you ever had any interest in 7 Wonders but are put off by the complicated learning curve, play Architects. If like me you prefer to play 7 Wonders only at the max player count, 7 Wonders: Architects could be a great middle-ground.

Yes, the rules and scoring are simplified compared to the original game. But you can play quickly with lower player counts with rules that are far more balanced. We played 7 Wonders: Architects for two hours straight at three players. I can’t play 7 Wonders at three players once and truly enjoy it!

Games like Quacks of Quedlinburg and Downforce have some company in the pile!

After discovering 7 Wonders Architects recently, I was keen to jump back in and play a few rounds. Alpal and Rabbit were keen as well, so we settled in for a few rounds.

7 Wonders Architects is an incredibly versatile game for many collections. Last week, we used it as an opener. A small game that we could play and chat over while we settled into the day.

We played for an hour and got six games in on that time. Six! That would have been three or four around the table with a physical version. But we could have played for another hour.

I will say that Alpal surprised me this round. She won the first three games in a row, and one by a margin of 20 points! Now Alpal is not a bad games player, but longer-term strategy often falls away to a narrative piece as she plays. I would love to know the narrative in her head as she quietly gathered point after point!

Even with a bad night’s sleep, I fell into the gameplay groove. The play is simple enough that I could almost play on autopilot. Having everything out in front of you makes a huge difference. Having the resources reset rather than epic engine builds also helps. An early miscalculation does not cost you the game.

I bought the physical version after the first time we played 7 Wonders Architects. I have one (ridiculous) complaint on the physical version – the cat statue is cardboard. There is a mini version as a promo, but I haven’t looked into getting one. Rabbit is considering making one out of clay, which is more personal and always fun.

Last-minute addendum to this week’s journal entry. While 7 Wonders Architects is a versatile game, short and light enough to slot into many game nights. One catch – don’t leave it as a closer. It’s not because the game isn’t good enough or fun enough. It’s because you don’t want a game with a high ‘One More Time’ factor to end the night!

We needed a game to topple Alpal’s winning streak this week. I also needed a game that didn’t engage too much of my brain, as I was finally relaxing after a long week. So we picked 7 Wonders Architects, a game that we tend to share out some wins.

Well, guess who won the first game? Looking at my game stats, I was surprised to see Alpal has won half of the games we had played. Somewhere from the back, she has become a 7 Wonders mastermind!

We had a lot of fun though. One game we play is nabbing the cat every chance we get. This ‘rule’ got broken a lot this week though.

I say rule, but it’s a silly bit of fun. Having the power to see what the central card is can be nice though. Rabbit even tried a military strat this time, which was unusual.

It does go to prove though that there still isn’t one dominating strategy in 7 Wonders Architects. The subtle deck shifts with each Wonder having their own deck also helps with this.

Sure, you could play with specific Wonders and decks and try to min-max the game. But why take the fun out of the game that way?