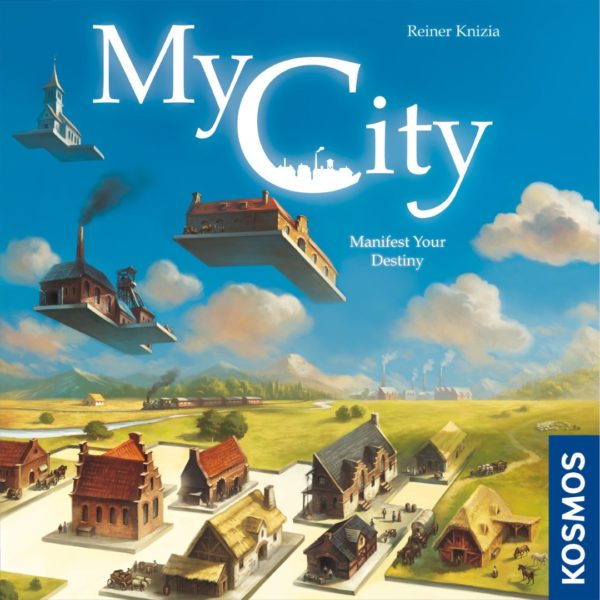 From Board Game Geek:

My City is a competitive legacy game in which you develop a city on your own playing board through the ages.

The game consists of 24 episodes, beginning with the development of a city in its early preindustrial stages and progressing through industrialization. During each game, players customize their experience by adding elements to their personal boards and adding cards to the game. Players' choices and action made during one session of gameplay carry over into the next session, creating a personalized gaming experience.

For players who do not want to experience My City as a legacy game, a double-sided game board offers an alternate set-up for repeatable play (some elements from the legacy experience are needed for the repeatable play game, players can unlock these elements by playing through the first 4 episodes).

I have acquired a taste for Legacy style games that teach you how to play as you progress. Gloomhaven: Jaws of the Lion is a good example of this. As much as I have enjoyed getting into them, it’s been a little tricky getting any to the table. So when I heard some good things about Reiner Knizia’s My City, I was keen to try it with Rabbit.

Legacy games can be ‘fiddley’, with lots of moving parts and mechanics to keep track of. My City is definitely on the easier side of this. Rather than being a large dungeon crawl, or RPG campaign, My City is simply placing tiles on your board. That’s it. Yes, there is scoring conditions that get added/tweaked, but the core gameplay is very simple.

There is a deck of cards showing the building tiles that will make up your city. Each turn, you flip over a card and then place that building. As you play, new buildings can only be put against buildings you have already placed. Your first building has to be touching the river in the middle of the board. You can’t place tiles on filled in mountains or woods. That’s it – you now know the basic gameplay of My City – it’s that easy.

My City consists of 24 episodes, split into 8 envelopes with varying rules. For the very first game, we had to cover up stones and leave trees visible. We lost points for stones and gained points for trees. It was a low scoring round, but with so ‘little’ to focus on, it was a great introduction to My City.

The legacy aspect of My City is like a rubber-band catch-up mechanic in video games. If you win an episode, you get progress points. Most points at the end of 24 episodes win. But you also have to put stickers on your board. So far, winners have had to put rocks down, giving you something else to cover or lose points. The loser of the round gains tree stickers, allowing more points to be scored next episode.

When Rabbit and I played, we played the first episode a once before doing a ‘this counts’ legacy game. This lets us see the rules and get a feel for everything, without messing with the campaign scoring.

Next time we play, it could be a couple of months away. But if we play through an envelope (3 episodes) each time, playing one episode this way will be a good refresher. My City is quick to play, simply turning a card and placing a tile. So a ‘fake’ game that takes a bit longer will allow everything to click again.

My City also has an alternate setup, allowing people to play a tile-placement game without a legacy component. I don’t have a lot of interest in this mode yet, and I’m not sure if I will. For this kind of game, I would probably flip back to Cartographers. But never say never. Don’t know who will come around for a game!