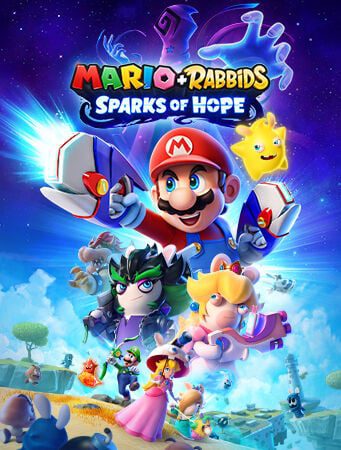 JOIN MARIO, THE RABBIDS & THEIR FRIENDS ON A MISSION TO SAVE THE GALAXY!

Cursa’s evil force is running rampant throughout the universe. It wants to consume the mysterious Sparks—uncanny and powerful creatures formed by the fusion of Lumas and Rabbids—and it threatens to destroy all who stand in its way.

Lead a team of your favorite Mario and Rabbids characters to bring back order to the universe and save the Sparks. Embark in this epic journey through mysterious, strange, and ever-surprising planets filled with fascinating inhabitants and compelling quests!

Mario + Rabbids threw me when it was first announced. Mario XCom with Rabbids shenanigans? It can’t work. Can it? Well, when Kingdom Battle first came out, I waited about a week and then jumped in with both feet. Mario + Rabbids are like peanut butter and chocolate. They shouldn’t work together. And yet…

So this week when the sequel Sparks of Hope was released, I was ready to jump in without waiting. Considering I was having a pretty hard week, the timing was great. Too tired for Bloodborne, the turn-based nature of Mario + Rabbids Sparks of Hope lets me still play.

And Sparks of Hope is almost everything I thought it would be.

That almost might put some people off, but let me explain. It’s a small niggle, not a huge problem. Gameplay-wise, Sparks of Hope is great. You start with most of the abilities you earned in Kingdom Battle. So things like moving boxes you can do from the start of the game.

There are new abilities to unlock to help on the overworld though, so exploration is still a key element. And the story explanation of how you earn new abilities makes sense, as the ‘Sparks’ are what you work with.

The niggle is the story itself, or at least the start of it. These new creatures, the Sparks, appear and are being chased by the big bad. Being Mario, you set off to help save the day. That’s it. That’s the setup. And I have almost zero investment in it so far. This is the only part of Mario + Rabbids Sparks of Hope that I felt has let me down.

But there are plenty of games I have powered through giving the story barely a glance. Mario + Rabbids seems to be the latest in this trend. Actually playing the game and enjoying the battles is exactly what I hoped for.

I will be taking my Switch to the work conference this week, and I am guessing will finish a fair chunk of the story. Only time will tell. For now, all I can say is if you enjoyed Mario + Rabbids Kingdom Battle, Sparks of Hope is well worth your time.

When you are travelling for work, it’s a bit of a mixed bag. Especially when it’s for a conference where socialising at night is a factor. This is where the Switch shines for me. Thanks to the turn-based combat of Mario + Rabbids: Sparks of Hope and casual exploration, gaming happened almost every night. It was nice to come back to the hotel and fire up the Switch to unwind.

I am making my way through the story at a reasonable pace. The XCOM-style battles are fun, but I am not spending too much time exploring the worlds I am unlocking. Sparks of Hope has a little bit of a collectathon aspect to it. Fans of the first Mario + Rabbids game already know this.

The good news in Sparks of Hope is you can ignore this aspect if you want, so any exploration has been because I wanted to.

Mario + Rabbids games don’t have the deepest story. I am at the point of the game I am pretty sure I can guess where the final boss battle with Cursa is going. This doesn’t take any of the fun away from the journey though, which I do appreciate.

There have been a few games where I picked the story early on, and that killed the fun for me. Mario + Rabbids embraces the flimsy plot and lets the player enjoy themselves.

I left Sparks of Hope after unlocking the fourth world. I am guessing once that’s done I will unlock the final world. It’s a situation where a quick Google search could tell me, but I don’t feel the urge to know for sure. I am content pottering through the game, and it lets me.

That’s a lot of the appeal of the Mario + Rabbids games for me. Casual enough gameplay that I can pick it up and put it down whenever. But enough of that certain something to keep pulling you back once you have put it down.

If you haven’t started Mario + Rabbids yet and are waiting for Pokemon Scarlet or Violet, I would suggest waiting. Sparks of Hope is fun, but I also feel if you were super keen you would already have it. Kingdom Battle got discounted, so I would wait a bit and see if you could pick up Sparks of Hope for a discount as well.

Being tired this week meant more time for Mario + Rabbids than I anticipated. The turn-based combat and relatively safe exploration modes make Sparks of Hope great for portable play. And portable play in this case means picking it up and putting it down as I rest on the couch!

Last week I thought I was about to take on the final level. I was out by an entire planet, so happy little accident there. Another level while relaxing in the evening was great timing. It’s a little hard to explain if you have never tried Mario + Rabbids. The more of the same formula is one of Sparks of Hope greatest strengths. Especially when you want to relax with minimal dexterity required. Sort of like grinding in Pokemon is restful?

It’s also hard to explain how Sparks of Hope is more of the same as Kingdom Battle, but different. The small changes to the gameplay meld almost perfectly. Unless you play the two games back to back you don’t notice many of them. For example, the grid-based combat system is gone, replaced with a free roam within a set range.

The eagle-eyed among you may have noticed that Mario + Rabbids: Sparks of Hope is now on my finished list. Yep, I did finish the entire story. Remember how I have said a couple of times that the story of Mario + Rabbids is mainly there to push you through? When you unlock the final world, the new backstory is explained in one exposition dump.

I had already guessed the majority of the story points, and nothing you learn helps in the final battles. So I was a little disappointed at the pacing killer. But once I was through, the final boss battles in Sparks of Hope were great to play. One thing that caught me by surprise is you play with all 9 characters! It was here for the first time I truly appreciated the squad loadout option before starting a battle.

So now that I have finished the game, I did go back and start cleaning up for 100% Completion. It was Saturday night, Rabbit was resting and I was still super tired, so it seemed a good time. I also didn’t mind looking up a guide for a couple of things that I couldn’t see how to do.

This isn’t a spoiler because the game doesn’t tell you (that I have found), but the little glowing spirals? Rotate the left stick quickly while standing on them to unlock them. This could just be me missing something telling you or forgetting from Kingdom Battle. Apart from that, now I can jump in and out and explore at leisure.

I don’t know if I will try and Complete Mario + Rabbids: Sparks of Hope. Not because I am not enjoying the game, but I have a week before the next deluge of games starts. There is a chance I will chip away at Sparks of Hope for completion, but I have barely touched my backlog this year. That’s not a good sign for Completion.

If you haven’t jumped in yet, I can definitely recommend the series overall. And because Mario + Rabbids: Sparks of Hope is a Ubisoft game, every now and then some good sale prices can be found!