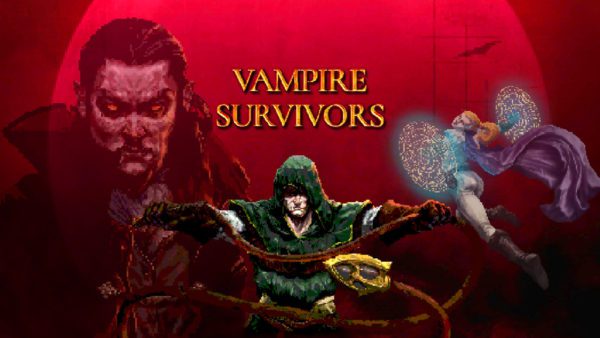 Vampire Survivors is a time survival game with minimalistic gameplay and roguelite elements.
Hell is empty, the devils are here, and there's no place to run or hide. All you can do is survive as long as you can until death inevitably puts an end to your struggles. Gather gold in each run to buy upgrades and help the next survivor.

The supernatural indie phenomenon that lets you be the bullet hell!

So, I’ve been hearing a lot about this game called Vampire Survivors lately. At first, I didn’t think it would be my cup of tea. I’m not usually a fan of idle games and the idea of “just moving around with the left stick” didn’t sound like it would be very fun. But, boy was I wrong!

I picked up the game on Steam during a sale, and at just $8, I thought it was worth a try. My first game was a bit confusing – I was surrounded by bats and wasn’t really sure what was happening.

But as I started to understand the mechanics and level up, I found myself really enjoying it. It’s a bit like the soulsborne games where dying is part of the learning process and hidden lore. It’s also like the old bullet hell or shmup games from my younger days. The firing is automatic, but there’s still a lot of depth to the gameplay.

One of the things I love about Vampire Survivors is how it keeps surprising me. There are some really cool, Lovecraftian elements to the game that I wasn’t expecting. I don’t want to spoil it for anyone else, but let’s just say that things can get pretty weird!

Overall, I’ve been having a great time playing Vampire Survivors. It’s become my go-to game when I’m tired but still want to play something. Playing it on the Win 3 or Steam Deck is a great experience and it’s perfect for relaxing on the couch with YouTube.

Sometimes, turning on the laptop isn’t an option. I think it’s safe to say that I’ll be playing Vampire Survivors more than Peglin thanks to this!

It’s been an eye-opening week for me, playing Vampire Survivors on my new Steam Deck. I had heard great things about the game as a time-killer, but playing it on this console takes the experience to a whole new level. I ended up spending about 8 hours on the couch playing it this week alone!

I’ve been using my Steam achievements as a guide to determine what to play next. Right now, it’s relatively easy to knock out a few achievements in one play-through. A lot of them involve playing with a new character and surviving for a certain amount of time, while others are for unlocking new weapons or evolving them into newer forms.

With a total of 159 Steam achievements, though, I can see how it would be quite a challenge to go for 100% completion. But I may be tempted to take up the challenge!

Even though I’ve put in a lot of hours this week, lying on the couch and playing Vampire Survivors on my Steam Deck has been a real treat. I think this will be a great way for me to work through some of the games in my backlog, as well as new ones.

For example, the remake of Final Fantasy: Crisis Core piqued my interest, but I thought I would skip it. I don’t want to play it on my big screen. Playing through the original on my PSP was a great experience, and tying yourself to the couch isn’t the same. Playing it on the Steam Deck though feels like it will be a perfect fit!

But before I move on to other games, I still have 53 achievements in Vampire Survivors to work through. I’ll be tackling them slowly but surely!