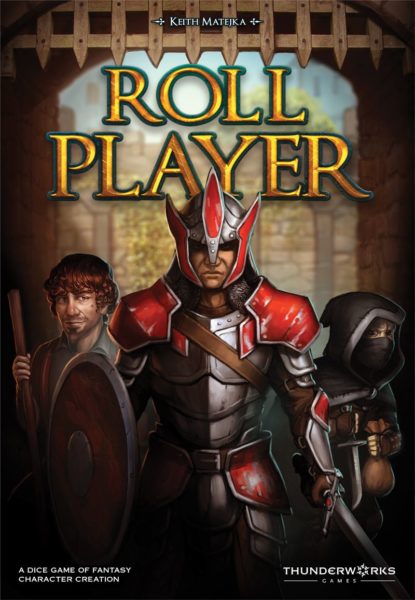 Mighty heroes don’t just appear out of thin air -- you must create them! Race, class, alignment, skills, traits, and equipment are all elements of the perfect hero, who is ready to take on all opposition in the quest for glory and riches.

In Roll Player, you will compete to create the greatest fantasy adventurer who has ever lived, preparing your character to embark on an epic quest. Roll and draft dice to build up your character’s attributes.

​Purchase weapons and armor to outfit your hero. Train to gain skills and discover your hero’s traits to prepare them for their journey. Earn Reputation Stars by constructing the perfect character.

The player with the greatest Reputation wins the game and will surely triumph over whatever nefarious plot lies ahead!

A couple of years ago, Alpal showed me a game she got called Roll Player. Like many titles she would show me, Roll Player had completely flown under my radar. After playing it though, it got me excited enough to buy a copy pretty much on the spot.

Roll Player has 6 character sheets, 73 coloured dice, and a lot of cards. These cards are used for the character class, alignment and backstory, and a market of goods. These goods are split between items such as weapons and armour, traits and skills.

This sounds like a lot to follow. The gameplay slows well and isn’t overwhelming at all. Setup though, especially for solo play, can be rather tedious. This is a large reason why I haven’t played it much.

But browsing Steam lead me to a nice surprise – I can play Roll Player digitally, and let the PC handle all the setup!

As I said, when playing Roll Player everything flows beautifully. Yes, there are races, attributes, alignment, and backstory goals to all keep track of. But you don’t have to refer to lots of books and tables like old-school role-playing games. Everything is laid out in front of you in a concise manner. On the digital version, this has been improved even more.

Your race from your character sheets shows any attribute modifiers. Your class has target scores for these attributes. The pips shown on the three dice make up this score, including any modifiers from your race.

All this boils down to putting dice in the right spot to score bonuses. That’s it. Yes, it will take a couple of rounds to get used to Roll Player. It feels like a huge information dump. But by the end of the first game, you will know all the scoring tricks.

The challenge is in the drafting element of dice selection, and purchases in the market. For each round, dice are placed on a drafting board from the lowest to the highest value. From the first player, you then pick which die you want to place on your character sheet. Picking first gives you access to the higher rolls, better for boosting your stats.

The catch is that if you pick a lower-value die, you have a better chance of buying good items from the market. Market items can be armour set collections, where the more of the armour you buy the more points you earn. You can nab weapons that improve your stat scores, or skills that allow you to modify the board.

Again, it sounds overwhelming, but you only have a couple of choices in front of you each round. There is an overall goal and strategy, but at the time, there is only a small amount of choice. There isn’t a perfect scoring strategy either. There is a large random nature to Roll Player’s set-up. You are never guaranteed the same market items, and you will likely never roll the same way each game.

Being able to play a game on Steam solo in under 20 minutes has meant I played Roll Player a lot last week. 11 times, to be precise. There is a pass-and-play version, the solo variant, and AI opponents on the way. I played solo, but if I was going to play with Rabbit I would be more inclined to pull out the physical copy.

If you ever wanted to try Roll Player, I can strongly suggest nabbing a copy on Steam. The expansions (Fiends & Familiars, Monsters & Minions) aren’t on the horizon yet. I still need to play both, and one day I will try Roll Player Adventures as well.

Oh, as a small bonus, if you do play the physical version you can make your own character sheets!

I decided to sneak in one game of Roll Player before writing up my game entries this week. Firing it up, I was surprised an update flashed up instead of the splash screen. I figured Roll Player is still Early Access, so I waited for the update to complete.

Thirty seconds later, I was pleasantly surprised. The AI multiplayer modes are now in-game! From what I can see, all levels of AI play the same, but the higher the level for more of a head start they receive.

What I thought would be a single cheeky solo game turned into an experimental round. I played with two AI opponents at the base level. Everything flowed pretty well, but I will likely turn off the game prompts as they break the flow. I did the same for the Solo game to help pacing as well.

One multiplayer game with AI on a day I was overly tired isn’t the best way to review Roll Player’s new feature. I will say it was fun, but I am 50/50 on if I will play the standard multiplayer with AI or solo more often.

I am curious to see how good the tutorial is for someone not already familiar with the rules. If there was anything about Roll Player digital that I would be wary of, that would be it. If this is something you are worried about, there is a great fallback. Watch it Played has a great rules video here and then the digital game becomes intuitive to play.

There is more to come with Roll Player, but not this week.

I still need to pack all of my physical Roll Player into the big box. I am reluctant to go all in mixing all the content together as Rabbit hasn’t jumped into Roll player yet. Well, I say jump into – I haven’t set it up to play with her. Little hard to know if she would like playing when I haven’t set it up yet!

This does come back to my biggest hassle with the physical version for a solo game. There is a lot of Roll Player to set up! Not enough to make it a huge chore like Mansions of Madness. It is enough to know that time could have been spent playing a round, especially on the digital version.

Yes, the digital version. Why wasn’t I firing this up at least for a game or two? So thanks to a reminder of sorts from Alpal, that’s exactly what I did!

Looking at gameplay variety, physical Roll Player has more content to offer. This is thanks to a couple of sizeable expansions that I have already received thanks to backing the Kickstarter. This is the content that is giving me pause combining everything into the big box. I have played some of it in the past, but keeping everything split for the pure ‘base’ experience is tedious.

Roll Player digital has made a few improvements already in early access, including adding the dedicated solo mode. It’s a solid product, and yes as per my impressions there are some tweaks I would like, but it’s good to play now.

I hope that Roll Player comes out of Early Access soon. It’s hard to know when is the ‘right time’ without being on the dev team though. The only reason I want to rush at all is so that the expansions can come out for even more play!