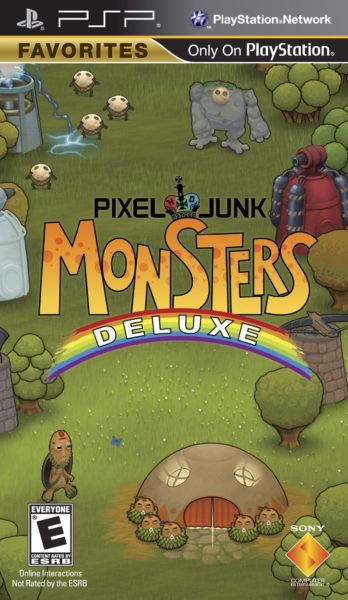 Defend your village against waves of monsters in this cute but addictive tower defense game.

Back in my PlayStation 3 days, I had 2 games that I would fire up for relaxed challenges. The first was Pain, a game that no one seems to remember. The second was Pixeljunk Monsters.

Pixeljunk Monsters is a tower defence game with a small twist. In these games, you are usually an omnipotent overlord manipulating the world below. In Pixeljunk Monsters, you are the chief on the ground, and have to run around and do everything yourself!

Waves of enemies make their way toward your village, and you need to save your people. This is done like any other tower defence game – build towers on trees to tackle the enemies. Different weapons are more effective against different opponents. It’s all a balancing act that you learn as you progress.

If you manage to finish the stage without losing anyone, you earn a perfect ‘rainbow’ clear. It was proof of mastery at every level, and I would play a level over and over until I got that rainbow. Back in the day, Pixeljunk Monsters was one of the few games I Platinumed. I also finished all the DLC trophies in Pixeljunk Monsters Encore. That was a rare event, and still is!

Then on PlayStation Portable, I was excited when Pixeljunk Monsters Deluxe came out. This version was not only portable but had the Encore expansion content and a whole new area just for PSP! I could fire up Pixeljunk Monsters and play a level wherever I was.

I would do the same on PlayStation Vita with Pixeljunk Monsters Ultimate HD. Unfortunately, the Vita died before I could Platinum this version. Ultimate is a remaster of Deluxe, but I never quite had the time to just go and finish it.

Well, guess what I have been playing again! I tried playing Pixeljunk Monsters 2 on the Switch, but I couldn’t get into it. I don’t know what it is about the sequel that put me off. The change to 3D models alone isn’t it. The feel from the 2D original is very different though.

Maybe I should give the sequel a chance. But for now, when I am on the couch and want to play something without ‘playing’ something, Pixeljunk Monsters is back on the menu!

If you have a Steam Deck or want to try it on PC, Pixeljunk Monsters Ultimate is also available on Steam. It is slightly different to Deluxe, but only in starting towers and monster waves are different.

Pixeljunk Monsters is a great game that I love coming back to every couple of years. The only downside is a level, even one that I know, is at least 20 minutes of play. I managed a couple of goes last week, and I am coming close to finishing the first island, or the original game.

There is one level left to clear, and that is an interesting puzzle that I can’t quite remember. In most levels, you learn the pattern of enemies and can usually build enough to cover mistakes.

This last level of Pixeljunk Monsters is a little unique, as there are only 4 trees on the level. The key to the level is knowing what to build where, and when to quickly replace it for the next wave. I have spent a lot of time on this level in the past. But do you think I can remember the pattern required?

I also gave the Tiki Hut a visit. These are generally the same levels you have already played but have different goals. For example, finish the first level without letting any towers upgrade. This gives Pixeljunk Monsters another level, including more puzzles to solve.

What I did forget is that clearing the Tiki Hut gives you rewards. Some are fun, like PSP wallpapers (I am playing the PSP Pixeljunk Monsters Deluxe version). There is concept art, and I am pretty sure some videos as well. It’s been a while, but I will probably try and finish Pixeljunk Monsters again over the next few months.

To be fair, I could probably beat the level in a try or two. It’s the timing for the rainbow I didn’t feel like committing myself to right now.

But Pixeljunk Monsters has a lot to offer, so I moved on to another island. The only thing is I think I may have moved to the wrong island. I jumped onto the smaller Gati Gati island. The order might be Toki island after the original Tiki island.

The only downside to this would be tackling some levels without some earned power-ups. It’s been fun playing them through the small handful of levels again. But something had been eating at the back of my mind. What is the difference between Pixeljunk Monsters Deluxe, and Steam’s Pixeljunk Monsters Ultimate?

The platform is the easy answer. Pixeljunk Monsters Deluxe is on PSP. Ultimate is on PC. But Deluxe had some tweaking, and you start with more towers without having to unlock them. That’s all I could remember. There might have been something a little more in there I couldn’t remember.

And in a weird way, there was. Target resolution. Yep, Steam’s Pixeljunk Monsters Ultimate looks much nicer on my laptop screen!

I haven’t gone very far into Ultimate. I am already missing some towers like the Ice tower available in Deluxe from the start. But that also gives me another level of the puzzle to play. Can I work out the level without relying on extra towers?

For now, I think I will stick with Pixeljunk Monsters Deluxe as my longer comfort game. Playing handheld on the couch with something on the TV is nice. But there will come a time I finish it all again. When that day comes, I may tackle Pixeljunk Monsters Ultimate again on PC in the future.