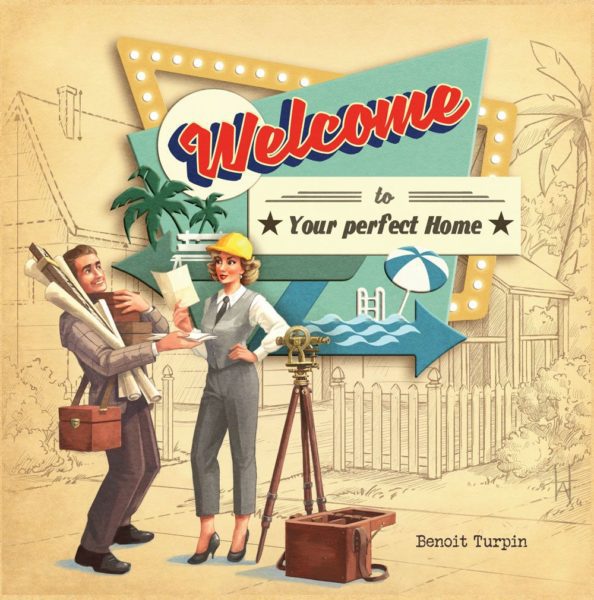 From Board Game Geek:

As an architect in Welcome To..., you want to build the best new town in the United States of the 1950s by adding resources to a pool, hiring employees, and more.

Welcome To... plays like a roll-and-write dice game in which you mark results on a score-sheet...but without dice. Instead you flip cards from three piles to make three different action sets with both a house number and a corresponding action from which everyone chooses one. You use the number to fill in a house on your street in numerical order. Then you take the action to increase the point value of estates you build or score points at the end for building parks and pools. Players also have the option of taking actions to alter or duplicate their house numbers. And everyone is racing to be the first to complete public goals. There's lots to do and many paths to becoming the best suburban architect in Welcome To...!

Because of the communal actions, game play is simultaneous and thus supports large groups of players. With many varying strategies and completely randomized action sets, no two games will feel the same!

Back in 2017, the Roll and Write genre got a huge boost in popularity. A style of game seen as ‘basic’ suddenly became the hot property. Yahtzee is the oldest Roll and Write I can think of. While it’s a game that is well known I wouldn’t call it super popular, but its lets people understand Roll and Write as a concept quickly. Roll dice, write down results to optimise points.

And then in 2018, Welcome to appeared in a huge way. Essentially a Roll and Write, but replaces dice for cards. One side of the card shows a street number between 1 and 15, and the other an action you can take. Shuffle the deck and flip the top card, and you have a set of three numbers and powers. So the same effect as rolling dice, but cards allow more combinations without increasing the number of dice.

But why does Welcome to have you doing anything? Well, you are a developer building your suburb. You want to create a well ordered and popular building development. This is done by ordering house numbers from lowest to highest, building parks, swimming pools and groups of homes as requested.

One of the things I love about Welcome to is what I call a ‘multiplayer solitaire’ game. You do what you do, and you solve the puzzle of points optimisation on your own. No one can do anything to sabotage you or mess with your score. This takes a lot of pressure off many players. Welcome to becomes a challenge of the highest score on your own skill.

And puzzle it is. Put a high numbered house to early in the row, and you lose placement opportunities. Building pools is good, and the more you build the more you score, but the house numbers and locations are scarce. Do you build a park and boost a score, or build a fence and group houses for points? Which serves you better?

You can see what other players are doing, and the choice of three options helps you avoid painting yourself in too much of a corner. But as I said, there is nothing anyone can do to you to mess with you. You won’t be forced to place something that hurts you, or picking something you don’t want in Welcome to. The most you can do is try and complete a set of houses before someone else – that’s it.

If there was a digital version of Welcome to, it would have a permanent place on my phone/computer. As a puzzle, it scratches a lot of itches for me. At the moment on my phone, Elder Sign: Omens takes this roll, but it’s a bit too involved for me to destress with. Welcome to doesn’t have this issue.

On Board Game arena and on the physical table, I have only ever played the ‘basic’ rules. There are many other options in terms of how to play. These include more complicated planning objectives, roundabouts and even keeping specific cards. One day, I might give them a go.

But if this intrigues you at all, have a look at Welcome to on YouTube for a rules explanation, and try it on Board Game Arena!

Saturday games day is a real highlight for me. Alpal, Rabbit and I playing on Board Game Arena is a great couple of hours that I always look forward to. We catch up for a little bit, and then pick games based on how we are feeling.

We didn’t feel particularly thinky this week. All of us were mentally at different stages, so something we knew how to play was going to be a great choice. Normally this is where Incan Gold or 7 Wonders Architects would be fired up, but we decided on Welcome to this week.

When I started up the first game, I thought we would play a few rounds and then switch like we usually do. The very first game was amazing fun. We had the usual first game warming up type play. Welcome To like many games can take a bit of a warm up.

But at the end of the game there was one point difference between our scores. This is very rare for any game, but even more in Welcome To!

And I mean one point. Alpal got 80 points even, with Rabbit and I tied at 79. We definitely all had the basics in hand, and we went from chatting to quiet gameplay as we worked on our suburbs.

We played Welcome to for just over two hours. We even had one more ‘one more game’ happen. OK, this is because I was being a smart alec after a comment from Rabbit, but no one truly objected.

I had a personal victory this game. My previous best in Welcome to was 115. Not a bad score, but plenty of people have managed better. This week, I managed to score 130! An extra 15 points might not sound like a lot, but once you clear 100 getting extra points can be hard.

The random nature of Welcome to means you can have a dream run. Or a nightmare one. Luckily for me, this was the former.

I will be surprised if we play Welcome to next week. If we do, I would be even more surprised if it is the only game we play. Welcome to New Las Vegas though, the first follow up game, may be a different matter.

But that feeling of wishing there was a digital solo version available remains. Ah well.

After the relatively long session of Isle of Cats, Rabbit and I wanted to keep playing. We needed something but needed to give our brains a rest though. We left it up to Rabbit to nominate a game, and to my surprise, she picked Welcome To. I honestly thought we would be playing 7 Wonders Architects to end the session.

Alpal and I weren’t complaining. Alpal had been playing solo lately, and I enjoy Welcome To. Usually, the placement and almost card-counting aspect of Welcome To is relaxing to me. This week, I lulled myself into a pretty deep relaxation, as I achieved my worst scores in Welcome To almost ever!

We still had a lot of fun, but I somehow talked myself twice into believing no one would elect to shuffle the deck. Sometimes resetting the deck allows new combinations, but usually, it forces the endgame. Number spreads are already all over the place. Forcing the same numbers back in the mix makes the chances of placing a home lower.

This is part of the pull of Welcome To for me. I know the stats, Alpal and Rabbit have a good grasp on the odds, but nothing is certain. The chance and almost push-your-luck elements mean no games of Welcome To are ever the same. There is no ‘perfect’ strategy because it is destroyed by the simple act of shuffling the deck. And that is a choice.

If you want to maximise your score with card counting and probability, you can. Welcome To lets people reset the optimal method players with one simple choice. You can’t score quite as high with risk mitigation, but you won’t be forced out well before you are ready. But if you are super lucky with the card draw, your score will soar.

We had a great couple of games though. The fact I scored poorly wasn’t the important part. The fact we all had a fun time chatting and messing with each other was. And Welcome To once again proved it allows for group fun with minimal effort on anyone’s part.