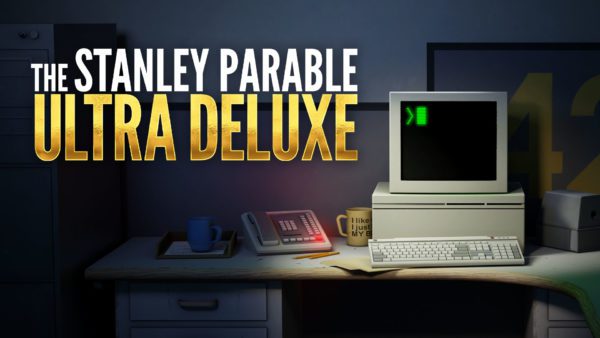 The Stanley Parable is a first person adventure game.

When a simple-minded individual named Stanley discovers that the co-workers in his office have mysteriously vanished, he sets off to find answers.

You will make a choice, and you will have your choices taken from you.

Contradiction follows contradiction, the rules of how games should work are broken, then broken again.

You are not here to win.

The Stanley Parable is a game that plays you.

Another Tuesday, another round of Stanley Parable Ultra Deluxe. Stanley Tuesdays have been a bit of fun the last few weeks. I have realised I have made a bit of an error though. I have been having a ball playing through the games, but I have not been keeping a log of how much I have been playing.

So I have no idea how close to playing 24 hours on a Tuesday I am! I could be one big Tuesday away from the platinum, or another month away! Whoops!

I might go for a guide within the next couple of weeks. I am at the point I am pretty confident that I have seen every ending, but it’s hard to know for sure.

That might be a good way to finish off everything – specific runs for all of the endings. This adds a goal to the gameplay and ensures that I see everything.

Will it be riveting to play? No. But it should keep the fun alive in the Platinum run. This is the part of Platinum hunting that can put players off – the grind. The Stanley Parable definitely offers a lot of variety and left-field story points. But bottom line you play as someone walking around an office. There isn’t much variety when playing for hours on end.

But that is what makes carving up the Tuesday task into chunks makes the Stanley Parable Platinum run ‘bearable’. It’s a fun reward that doesn’t take much effort from me after a big day at work. Tuesday’s are my office day and include a couple of hours driving, so taking it easy after all that is very welcome.

I do want to avoid simply leaving the PlayStation 5 on for a Tuesday, but honestly, it’s tempting right now. Coming up with different ways of playing the Stanley Parable isn’t a good sign. But that is for later. Let’s see if I can do it all ‘properly’ first!

It’s a quick summary for Stanley Parable Ultra Deluxe today. I got in a bit of a Stanley Parable Tuesday, and I thought it would be a ‘normal’ Tuesday trying to find new paths.

I am not stepping around potential spoilers with the Stanley Parable anymore. The game is over 5 years old, and it’s been a while since the new version came out. So if you still want to try the game blind, it would be best to move on to the next entry.

I started the game, and as usual, I was presented with the sequel title selections. The Stanley Parable 8 was ready to start, and I was about to tear around the office again. Except for this time, there wasn’t an office to explore.

Expecting the office, the Stanley Parable managed to surprise me with a new area. It’s not a major new area, but it’s not something I had seen before. A room with a button and some monitors. Hit the button, and the number 8 appears on the screens. And that’s it – there is nothing more to interact with.

The Narrator got quite annoyed that I wasn’t restarting the game. This lead to some funny lines as he assumed that I enjoyed the room more than ‘his’ game. Of course, this isn’t true.

But I had talked about trying to find new ways to keep the Stanley Parable interesting. Looks like the developers had planned out the timing of this surprise nicely!

I still have no idea how close I am to playing for 24 hours on a Tuesday. This is all I have left to Platinum the Stanley Parable. It’s got to be getting close though. Maybe next week the Platinum will be unlocked?

It’s done. The Stanley Parable Ultra Deluxe Platinum trophy is now mine. And the amount of time left to complete the last trophy? About 18 minutes. I was so close to doing it a couple of weeks ago!

I was ensuring I went through all the ‘non-bucket’ endings, as these were the ones I tended to rush through. I couldn’t remember what I had or hadn’t done, so I was going through a few of those. Guess what I was up to when the Platinum popped?

Karmically appropriate – are you over playing on a Tuesday for a trophy? I found this more amusing than maybe I should have. The bottom line – intentional or not, the Stanley Parable provided one more unexpected joke. That was the perfect way to end my run.

I’m not saying I will never play Stanley Parable again. It is still an amazing experience that managed to surprise players new and old alike. The journey I have taken with the Narrator as Stanley will always bring a smile to my face. because of that, it’s a journey I would encourage anyone interested to take themselves.