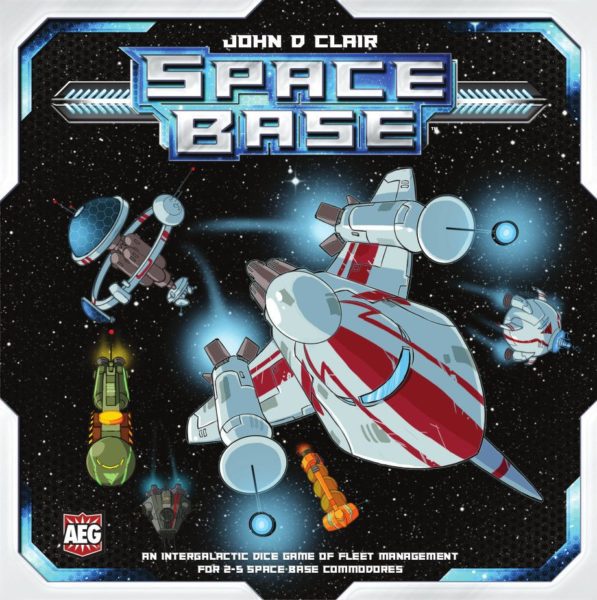 As the commodore of a Space Base, your job is to draft new ships into your fleet to work and patrol the 12 sectors under your watch. Use cargo vessels, mining ships, and deploy carriers to earn profits and expand your influence. Only one Space Base commodore will be promoted to U.E.S. Admiral of the Fleet!

Engine Building games are a genre that either hits or misses with players. Engine Building involves long term planning and quick direction changes depending on luck. This sort of game isn’t something you can generally do on autopilot. Machi Koro is a game that was ‘The Hotness’ a while back, which helped introduce Engine Building to people.

Machi Koro’s greatest strength is it didn’t look like an engine builder. You buy cards that when a specific number is rolled allow you to earn money listed on that card. This lets you buy more cards that activate on different numbers. This is where I get Engine Building from. If you don’t plan to get something every turn, you are putting yourself at a disadvantage.

A few years ago, Alpal introduced me to Space Base with the description of ‘Machi Koro in Space’. This is a good basic description, but there is a little more going on. The basics are close enough though. You are building your Space Base, and buy cards from the open market to expand your base. Each turn two die are rolled, and you can activate two dice separate (so spots 1 to 6), or activate the sum of the 2 die (2 to 12).

There are three main resources in Space Base. Rockets are your victory points, and the first player to 40 rockets triggers the final round. Most Rockets wins – pretty standard scoring.

You also have Money (we always call it Gold because of the icon) to spend each turn. This accumulates as play goes around the table, but anything you don’t spend on your turn is lost. That is unless you have Income.

Income is the most confusing resource to describe. From the description, you would expect to get Money each turn. In Space Base though, Income is better described as ‘savings’. You can keep Gold you didn’t spend up to your income amount. So for example you had 10 Gold, 3 income and bought a card for 4 Gold. Instead of losing all 6 remaining Gold at the end of your turn, you keep 3 for the next round.

There are a large number of cards to buy, with a huge range of abilities. There are your basic ‘Get Gold or Income’ cards, but there are also fancier cards. Some let you pick the rewards of the cards next to that ship. Others let you manipulate your board state, switching positions. Space Base even has an instant win card.

That’s right – there is one card that if you can charge it up a few times, you win. Your score is irrelevant. Alpal actually came close to pulling this off on Saturday. Space Base on Board Game Arena was fine, but you can overlook your opponent’s boards to see what is happening.

If Alpal hadn’t mentioned she needed to roll 12 to win, we wouldn’t have noticed. At the time I was feeling bad as she hadn’t scored much and I thought things had gone wrong for her.

Space Base comes across as a heavier game than it is, but it is a game that can easily discourage new players. There is a lot to learn in relation to the types of powers available to buy, but the actual rules are quite simple. Rabbit came to grips with the game during the first game and began playing ‘properly’ in her second game.

The only reason I put the air quotes around ‘properly’ is because she had very little exposure to all the powers. From floundering in the first game, Rabbit took an early lead in the second game. The missing ingredient was Space Base needed Rockets to win, and she latched onto that well.

My guess is it will be a few more years before I play Space Base again, but I will enjoy it when it comes around. If you were one of the many that played Machi Koro and wanted a bit more to the game, check out Space Base on Board Game Arena.