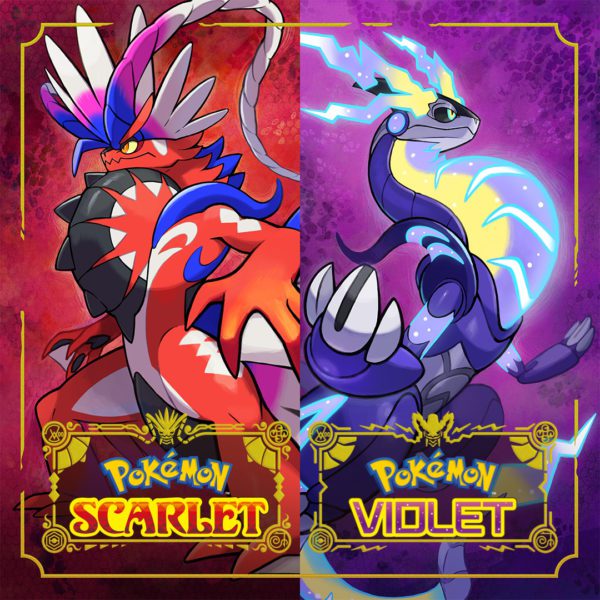 Pokémon Scarlet and Pokémon Violet are the first open-world RPGs in the Pokémon series. As you enjoy the hallmarks of the series—meeting, teaming up with, battling, training, and trading Pokémon—you’ll be able to immerse yourself in a newly evolved adventure.

I mentioned last week that I started Pokemon Violet. I tried to get into it again this week. After getting the Platinum in Bloodborne, I thought I would have time to get into Pokemon. Well, I had the time, and with some long days at work, the basic RPG elements of Pokemon should have been a nice relax.

Truth is though I can’t get into Pokemon Violet. There is a bunch of buzz about ‘terrible’ graphics, poor frame rates, and other quirks. none of this is causing me issues in getting into the game. I wish I could put my finger on what the issue is – I just start playing and kind of mentally shrug.

The start of any RPG is the most dangerous time. Designers can’t throw you in too far in the deep end, or only a small percentage of players stick around. Hold the player’s hand too much though, and almost the same number of players walk away. It’s a balancing act. Game Freak and Pokemon have had their formula down pat for almost three decades! I knew what I was getting into, and Pokemon Violet was exactly what I expected.

Pokemon Violet is a very different game from the old-school Game Boy and DS versions. Newer games such as Pokemon Let’s Go and Pokemon Legends: Arceus started playing with the set formula. Pokemon Scarlet and Violet are the results of feedback from these games, and I like where Pokemon is going.

Here is the thing though. I have run around, done a couple of tutorial sections, but I haven’t had any urge to make progress. The story starts with essentially your first day at school, and I haven’t made it there yet.

Not because I am being distracted by side quests or hunting Pokemon early on. I just play for about 10-15 minutes and feel like putting Pokemon Violet away.

I want to play Pokemon Violet. Nothing about what I have been playing has put me off at all. There is even now a patch to help smooth out some of the complaints.

When I want to play visually impressive games, I don’t go to Nintendo games. Their hardware doesn’t push that particular envelope. I am not saying that Nintendo games haven’t looked good, only you can’t do God of War-style graphics on Nintendo hardware, and people seem to forget that.

I play Nintendo games because they tend to be fun and relaxing games to take my mind off the world. And I hope that this week, I turn some magical point in Pokemon Violet to get me invested.

I am trying to enjoy Pokemon Violet. This doesn’t bode well overall. I did make a night where I had a reasonable session, and I have unlocked the ‘main game’ portion of Pokemon Violet.

Well, that’s what Pokemon is telling me. My school assignment is to travel the country and do what I want. I don’t see why the emphasis on the school in Pokemon Scarlet and Violet at this point. The standard ‘I am off to be the greatest trainer’ would have fit with less mucking around to start the game!

I did fall into the open-world trap very early on. You can go anywhere to start the game, except apparently the gate I left the school by. Pokemon Violet makes it very clear that taking the West gate is for Victory Road, and the East key is for another questline. I got a little turned around, and went I think Northwest?

Travelling up a hill, I caught a couple of new Pokemon to fill out the Pokedex, and met a bouncer NPC of sorts. Trigger typical Pokemon battle, all things I was expecting.

I was not expecting the level 50+ battle at the start of the game!

As I said that was an open-world trap, not a complaint against Pokemon Violet. I moved to the ‘correct’ West gate, confirmed by some NPC conversations. No harm, no foul.

It was here I saved Pokemon Violet again, and I haven’t had the urge to pick up the Switch again for the rest of the week. I am typing up the journal entries before doing any gaming today, so I might pick up the Switch this afternoon. But it’s a maybe.

End of the year, calendar or financial, tends to kick my butt. Pokemon has been that semi-mindless enjoyable RPG that I could fall back onto to relax with. Pokemon Violet though has been a conscious decision to play, and I wish I could put my finger on why.

Is Pokemon Violet different enough that my brain is rebelling against learning something new when wanting a break? The only thing I can say it isn’t is the ‘terrible graphics’ or ‘poor framerates’ I see complaints about. Yes, I would like Pokemon to run smoother overall, but I am at the start of the game – performance isn’t putting me off.

Something else for me to think about after having a day of rest I think!