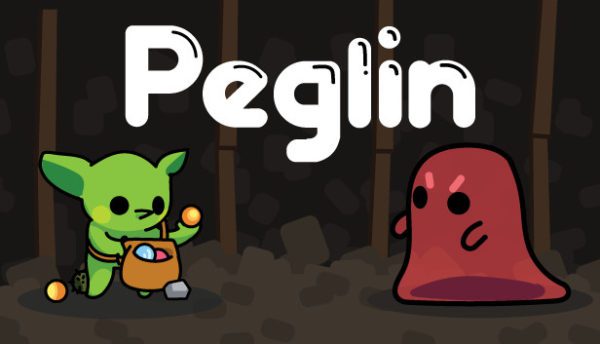 Peglin is a Pachinko Roguelike - Fight enemies by collecting special orbs and popping pegs to deal damage. Acquire special relics that radically change the game and ensure no two runs are the same. Aim carefully to survive in this unique turn-based RPG!

I have been writing about how Elden Ring has been a relaxing time. That still holds and is still a great escape, but a new diversion appeared to me this week. Watching a friend of mine Schmean, he started a stream with a game called Peglin. To say I was intrigued was an understatement.

Turn based roguelike adventures like Slay the Spire have been very popular recently. Peglin is another of these games, but instead of using cards to combat enemies, you play Pachinko!

If Pachinko doesn’t ring any bells, and you are old enough, you play Peggle to beat up the bad guys. If you don’t remember Peggle, ummm… Reverse pinball? 🥲

Years ago I played Peggle to zone out for a little bit. Levels were reasonably quick, and jumping in for one level was a bit sized gaming session. Couple that with a quest, and I was always going to give it a try.

Well, I say try. To be clear right now, Peglin is in early access. There are ‘only’ 3 levels made up of multiple paths, and I managed to clear the game after about 7-8 hours of play.

This might sound like an overpriced demo to some, but Peglin already has more to offer. Being a roguelike, the multiple paths and a big boss at the end are set, every area and level boss changes. That alone offers a lot of replayability. There is also a heap of artifacts (power ups) and events thrown in that can make or break a run!

Your weapons are orbs that are launched into the Pachinko board. There are strengths for each orb, and maybe a special power. Each time you hit a brick that launch, the strength is added per brick and is what you hit the enemy with. That’s it. Peglin’s strength is in its simplicity. Yes, you are facing endless hordes on an adventure. But all you need to concentrate on is watching a ball bounce around!

I have managed to beat all three levels and unlock Cruciball mode. On a surface level, this gives you one extra starter ‘ball’, but lowers the strength of your stones (basic orbs). I am assuming when I beat Cruciball level 1 (where I am now), level 2 will add another difficulty modifier.

For the moment, I am most likely done with Peglin and swung back to Elden Ring. But I will be watching Steam for notifications of updates and new features. For example, multiple characters to choose from is coming soon. That could add a few new twists to the gameplay.

Even as it stands now though, Peglin is a fun little experience that I have been enjoying.

There were a few times that I wanted to kick back for a small game session this week. Nothing too much – maybe a half hour and something I could easily put down. Peglin seemed like the perfect option!

I haven’t noticed any new updates (Peglin is in Early Access), but I unlocked the Cruciball last time I played. Think of Cruciball as the New Game+ challenges of Peglin. At the first level, you get an extra stone but they are weaker. The second level, you can be surprised with miniboss battles. And now, on level three, all the enemies have more health.

I am struggling on level three. I have cleared the first-level boss once, and I am having trouble making it through half of the level most runs. Peglin got a huge difficulty spike, but I am still enjoying it. There is an implied challenge in place. Peglin is saying “Oh so you think you have a handle on things now hey? Now let’s see how good you are!”.

In the earlier game modes, if I had a stone that goofed it was easy to come back from most times. Now the enemies are stronger, I can’t afford to waste shots. Damage needs to be maximised for each turn, or suffer the consequences!

If a fun challenge that requires very little dexterity and quick decisions on your part sounds interesting, have a look at Peglin. The premise can be confusing, but once you start playing I think most will enjoy playing.

Saturday morning I found myself tired but unable to go back to sleep. I wanted to watch something, but I was having trouble focusing. It’s a state I am sure we all know well – the mind wants to do something, but the body wants to rest. Or the other way around. It can be a very frustrating state to be in.

So while some YouTube played, I decided to see what games I could play. It was then I noticed that Peglin had an update. What better time to give it another go!

There are some new orbs to play with, as well as new encounters and little bug fixes. I have been stuck on Cruciball level 3 for a while, and I was hoping some of the new orbs might help.

Short version, Peglin managed to tease progress but dash my hopes. The increased health and multiple mini-boss battles have taken their toll. I don’t think I have managed to get to the third area since reaching Cruciball level 3. And yet, it didn’t take much of a push to fire Peglin back up again.

One thing that crossed my mind while writing this is I could just drop the level and not hit a wall of enemies. I don’t know why I haven’t done this already. The only ‘penalty’ is I couldn’t push into more levels of Cruciball. Peglin itself would still be a fun experience and one that I could walk away from mid-game and come back to easily.

The one thing that will keep me coming back to Peglin apart from updates is what challenges await. I don’t know why I feel the need to prove to myself that I need to bend pachinko to my will. But Peglin has set itself up to be a fun diversion that keeps calling me back to do just that.