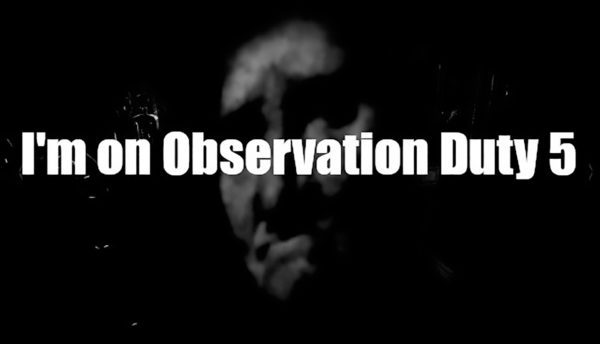 The goal is to survive the entire night.

I have been in a bit of a horror mood with The Quarry coming out this week. I won’t get a chance to play The Quarry this weekend, but that doesn’t mean I can’t play other games to scratch that itch. The latest in an indie horror ‘spot the difference’ game has been tapping into my gaming attention. So this week I finally fired up I’m on Observation Duty 5 and gave it a whirl.

For people that aren’t familiar with the series, a little introduction. The entire premise is timed spot-the-difference combined with memory. You go to a location and view a series of rooms through security cameras. As you proceed through the night, things will change in the rooms that you need to report. These changes are called anomalies.

If you have too many anomalies occurring at once, you lose. So you need to be attentive and report any differences quickly.

In I’m on Observation Duty 5, there are a couple of changes to gameplay depending on where you go. For most of the series, you would have to report a room and a type of anomaly type. Some locations in Observation Duty 5 only need you to identify the room with an anomaly, not the type. This sounds like an easy mode, but of course, there are twists.

The anomalies in these locations are generally a little trickier to spot. Not all, but some. Subtle differences can lead to an anomaly build-up, losing you the game. The other twist is you are penalised for false reports. Three incorrect reports will now also lose you the game!

So far I have been talking about a game that might sound relaxing. Well, there is a horror element to the game as well. Observation Duty 5 doesn’t rely on jumpscares like Five Nights at Freddy’s. That doesn’t mean that everything is smooth sailing though.

Depending on where you are, anomalies can be objects moving or paintings changing. Sounds OK. Some are intruders that can appear and even seem aware of your presence through the camera. Sometimes there are body parts randomly lying around the room, which can catch you unawares. And then, there are the Abyss events.

I’m not going into too much detail on Observation Duty 5 and its anomalies. You know if you are a horror fan or not. If you lean towards horror ‘light’, I will spoil that normally the biggest ‘jumpscare’ is a clock ringing out the hour. I almost always lose track of time during a game, and the unexpected gong makes me jump at least once each time. That is the worst of it though – there aren’t super loud screams constantly which is nice.

If any of this sounds interesting to you, I’m on Observation Duty 5 (the whole series, actually) is played a lot on YouTube and Twitch. Check out a video of someone playing, and see what you think. If you are willing to give it a try, you can get the entire series for less than AU$30 on Steam as well.