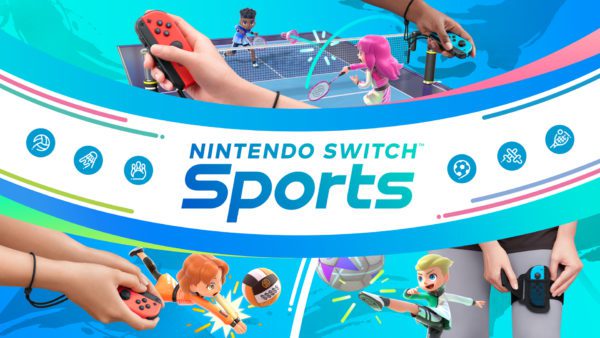 Grab a Joy-Con controller and use real-world movements to take part in a variety of sporting activities that’ll get your body moving. Gather your friends and family to join in the fun on the same Nintendo Switch console, or seek out new competitors in online multiplayer!

Wii Sports was a phenomenon back in 2006. Was it gaming greatness? No. But it was fun to play, especially with friends. Bowling and boxing were my favourites and archery from the follow-up Wii Sports Resort. With the games pushing two generations of console sales, I was surprised that Nintendo Switch Sports took so long to come out.

When I saw the initial games lineup for Nintendo Switch Sports, future DLC alerts went off. Wii Sports Club had the same sales model, with extra events ‘rented’ to you. It’s not like Nintendo hasn’t shown many times profits over customer experience. But I told myself that this was looking for the negatives, and the games I played were fun. So I nabbed Switch Sports, thinking that at worst Rabbit and I would enjoy bowling and tennis.

Well, I can’t hide it. I am overall disappointed with Switch Sports. Somehow Nintendo has taken a solid nostalgia driven experience and messed it up. It’s the little things that confuse me. Like why would local game players need to be added as users to the Switch? This may be me misunderstanding an aspect of Switch Sports I haven’t tried yet. I will always give the benefit of the doubt when I haven’t fully explored a product. But the initial impression is that once again, Nintendo has added needless complexity.

For example, on our first time playing, I took the default character. Rabbit spent a couple of minutes customising her player and seemed OK with the options. While grabbing some footage, I hooked the Switch up and decided to customise my avatar. I spent about 3 minutes messing with the limited options, then went to play with the body option. It’s here under body you can choose to use your Mii. Why hide it so deep in the options?

So in terms of the actual games, I have not tried soccer/football and I am unlikely to. I am not against the game at all, soccer takes a lot of skill. To play soccer ‘properly’, each player needs the leg strap from Ring Fit Adventures. I only have one, and I bought Switch Sports to play with Rabbit, so that pretty much eliminates soccer as an option.

Bowling is a different story. Rabbit and I enjoy bowling, but neither of us has been for years. Now we can have a bit of fun at home, without worrying about being old and unfit!

Rabbit has taken to bowling in a big way. On our first game, she opened with a turkey, or three strikes in a row. I managed to put so much curve on a ball that it went across the entire lane and straight into the gutter! While I don’t see us starting up a virtual bowling league anytime soon, Switch Sports has kept the nostalgia of Wii Sports bowling intact.

Tennis is another story. I didn’t mind playing a bit of tennis by myself on the Wii. Switch sports has pretty much ended this. It’s not because the implementation is bad. Swinging your joy-con to emulate your racquet works well enough. What I don’ like about tennis is you are forced to play doubles only.

It might seem strange, but being forced to play two characters at once doesn’t feel right. If it was an option. doubles would be a welcome addition. Mechanically it works fine, swing early for the fore player or slightly later for the rear player. This even gives you the safety net of a second swing. But on the whole, it felt underwhelming.

If you want one on one play, you have to pick badminton. There is nothing wrong with badminton as a sport, but it’s not tennis. Again, the mechanical implementation by Switch Sports is fine. The type of shot is set by timing or button press while swinging. Apart from that, it seems a bit strange.

For example, I have managed to clean sweep Rabbit when playing. Not because she can’t hit the shuttlecock, but because somehow her avatar keeps falling over. Not having a clear understanding of why this happens makes the experience confusing. The tutorial covers serving and timing, but not ‘making your opponent dive’. Switch Sports can make this a lot clearer, but the game does work.

The one thing that surprised me is that as a tennis replacement, I missed the option of table tennis! That would have been better for me.

I tried volleyball by myself against the CPU, as I had heard mixed reports already. I can confirm that for me, volleyball is the weakest Switch Sports game I played.

The players alternate between three moves: lob, set and spike. On alternate turns, you can also attempt to block. This makes for a strange rhythm type game that has you following a very set pattern. Maybe this would be fun with 2 or 4 human opponents, where you can talk and socialise while playing.

It would take some convincing to get me to try Switch Sports volleyball again though.

There may be one sleeper hit though. Chanbara, or sword fighting, has potential for me. There are a few ways to play, including twin swords. I haven’t tried this mode yet, but it is the one mode I am looking forward to. I may have something to say about this next week.

There is also a charged sword mechanic that I haven’t tried, where you gain power while defending. At first I thought this sounded a bit meh, but it may be best for technical play. While you can lock yourself in a defensive stance, if your opponent attacks in the same direction you are defending the blow goes through.

So bowling and maybe chanbara are the best Switch Sports has to offer for now. If Nintendo does the DLC route for extra activities, I hope archery and boxing are high on the list. I won’t be grabbing either straight away though. Given some of the interesting directions Switch Sports has taken, I will be waiting for reviews.