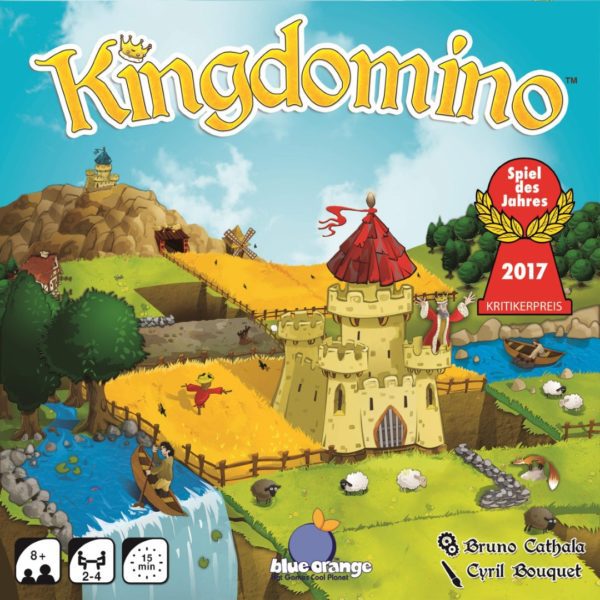 Kingdomino is a 2 to 4 player strategy game that plays like dominoes with a kingdom-building twist. Each turn you will connect a new domino to your existing kingdom, with different types of lands that must connect.

Make sure to include dominoes with crowns on them! At the end of the game you will score points equal to the total number of matching lands multiplied by the number of crowns in that land area.

What games do you reach for when you want to catch up with friends, but still play a game?

This isn’t a loaded question. There are heaps of games that fit the bill. Love Letter is an old favourite of mine for catch up gaming. Gloom is another with certain groups. Even Lords of Waterdeep works well with other players.

Catching up with Alpal and Rabbit we picked Kingdomino to start our session with. A little strategy, a little luck, and plenty of time to sit and chat during turns.

Sure, Kingdomino isn’t at its best with 3 players, but it’s still a fun game we all knew. It was during this first game while enjoying the chat I remembered something.

Don’t let Rabbit get all the gold mines!

I thought Rabbit would be the runaway winner that first game. It was at the end with all the scores I remembered a second thing about these players in particular.

Alpal may say she has no strategy, and act like everything is random, but she will score no points or all the points. In what I thought would be a runaway victory for Rabbit, there was only a point between the two of them!

For me, the best part of this is that this was a surprise, even though the scores are shown while you play. We were all more focused on having fun and chatting than going for cutthroat moves.

Kingdomino proved itself once again a great opening choice. Light gaming in a relaxed state, but enough bite to be satisfying at the end of a game.

While it is fun playing Kingdomino on Board Game Arena and a great way to try before you buy, I did miss playing with the tiles in person.

I need to sit down and play Queendomino. I can’t do this on Board Game Arena, so this might be a suggestion for an in-person gaming session soon.