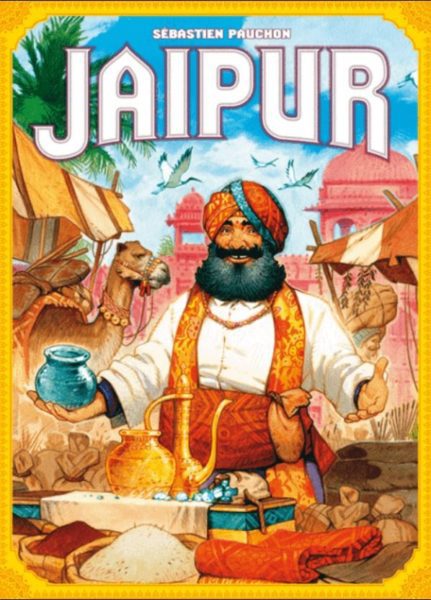 In Jaipur, you are hoping to become the Maharaja’s personal trader by amassing more riches than your opponent at the end of each week. To do so, collect and exchange goods at the market, then sell them for rupees. If you manage to arrange a larger sale, you’ll receive a reward. The camels have no sale value, but they’re very useful for trading, especially when you want a lot of goods from the market.

At the end of each round, the richest trader receives a Seal of Excellence. The first player to collect 2 Seals of Excellence wins the game.

Back quite a few years ago when I first moved to Brisbane, I used to go to a games night at the Kookaburra Cafe. The main host and I became good friends, and one day he sat down with me excited to show me a two-player game called Jaipur. I was intrigued, and then very quickly hooked.

Jaipur has a simple premise – collect and sell sets of goods to earn the most money. The round ends when three rows of rewards for goods are claimed, and you play the best of three rounds. There are some other things for scoring, like selling sets of three, four or five products gives a bonus. Selling early gives you a points boost, but these bonuses waiting for a higher set can swing the game.

Between the two players is a row of five cards, and you have three possible actions. Take, where you simply take a good into your hand. Trade, where you switch at least two cards in the centre market with the same number from your hand, and sell. Sell is where you trade your goods for points. There isn’t much to get your head around in Jaipur.

There are a few items that you can trade, including camels. The player with the most camels at the end of the round gets a five-point bonus. During the game though, camels are a great item to trade with. Camels do not count towards your 7-card hand size limit and can allow you to capitalise on a dream draw.

I introduce Jaipur to Rabbit and unfortunately botched the initial rules explanation. She did make the comment that Jaipur needs more patience to play than she had at the end of our game day. I never thought of Jaipur this way. A little bit of card counting, risk/reward for gaining or selling items at the right time, but not ‘patience’.

Either way, it was really fun to play Jaipur as it had been far too long. Maybe I can talk Tim into a game or two once work settles back down…

So catching up with some of the old gaming crew led to Harls and me at the end of the night. Not uncommon, we would stay until stumps most nights. While we had a mini-gaming night with the ‘old crew’, I talked Harley into a quick game of Jaipur.

As Jaipur is a best of three games score, and we didn’t want it to drag out, a quick refresher melded naturally into play. I took the first round a little easy (not too much – Harls is a great player) to reacquaint Harls with the rules, then took off.

Being a two-player game, and a lighter one at that, it’s hard for me to say that everyone would enjoy Jaipur as much as I do. Or that it is a must-have on people’s shelves. But I had a lot of fun playing it again, and it was quicker to get to the table again than I thought it would be.

That said, I might pull out the physical copy and maybe try a game or two with Rabbit on the table. If I do it as the first game, and with something to hold onto, maybe Jaipur would click more with her?