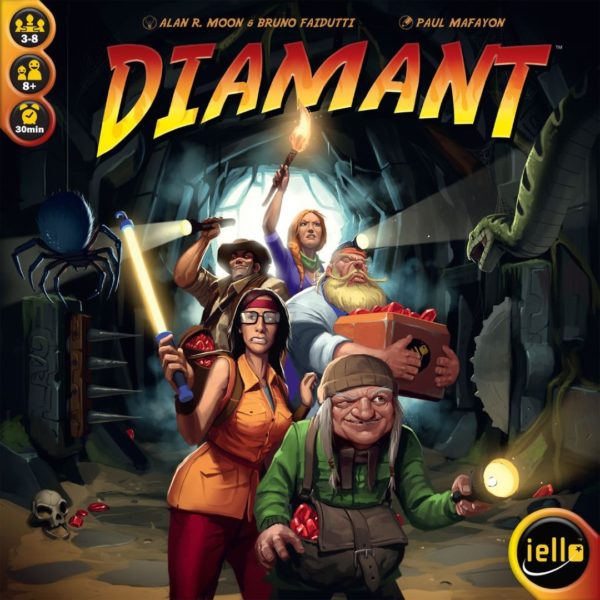 Incan Gold (or Diamant depending on where you are) is a push your luck exploration game.

The rules are simple - everyone plays at the same time, and have two decisions to make.

The first decision is if they will explore the temple by drawing a card, sharing any treasure found. Or, they can take what they have collected and head back to base camp, sitting out the rest of that round.

Why would you go back? Half of the temple (deck) is dangerous. There are five types of dangers in the deck, and if two matches while exploring everyone goes back to camp empty-handed!

A fun simple casual game that even non-gamers can enjoy.

Years ago I joined a games group that met up at the Kookaburra Cafe in Paddington. It was there that I met Alpal and discovered her love and weakness for push-your-luck games. The game we played but I could never track down a copy was Incan Gold. Many may know Incan Gold as Diamant – it is the same game.

The basics of Incan Gold are simple, and the gameplay time is pretty short. Lots of people would come over and look as well, even though it looked like a card game. That’s because the score tracker was acrylic gems – still a novelty at the time. And lots of us enjoyed playing as we could talk around the game with no real impact on the play.

The game length is short for a very simple reason – everyone plays at the same time. As a group, you decide if you will explore deeper, or return to camp. If you explore, you share any gems evenly amongst those in the temple. If you return to camp, you pack up the gems you have collected so far and wait for the next round.

And why wouldn’t you keep exploring? Because the temple deck of 30 cards is 15 treasures and 15 dangers. There are five dangers in total (3 cards each). If you flip two matching dangers those exploring must return to camp empty-handed.

There is only one real rule variant and that is treasures. If you are the only one returning to camp, you can claim the treasures shown. These are worth five points at the end of the game. The catch is if anyone else returns at the same time, the treasures stay where they are.

Do this for five rounds, and the person with the most treasure wins. That’s it – you know how to play Incan Gold!

And like many simple games, that’s why I love this game. You can talk about anything during a turn, as no gameplay can be missed. The goading and prodding while people try and work out if they should continue or play it safe can be hilarious.

Incan Gold is a great casual game, especially good with new people. Easy to teach and learn, and allows free conversation so everyone can get acquainted.

We were very happy to see Incan Gold on Board Game Arena, and I can see many more games in the weeks to come.

Saturday’s Board Game Arena catch up with Alpal started with a long-overdue chat. Not about anything in particular. Even though Rabbit, Alpal and I have been playing online for over a month, we hadn’t caught up properly for ages. Board Game Arena makes it too easy to jump straight into a game!

And after a nice catch-up, I thought it would be best to start with Incan Gold. That way we could keep talking and being chatty without switching on ‘game brain’.

Well, this seemed to work well for Alpal. In the first game, she pushed her luck to the point that she hadn’t scored a single point most of the game. On the last expedition though, she managed to score enough to win the game!

This went on for the first three games. Alpal was on fire! The cards were definitely with her. Alpal reaped all the Incan Gold!

Rabbit and I even tried to goad her to stay and push her luck too far. Well, that backfired almost every time. On my screen, getting through an entire row is pretty rare, so I was egging Alpal on to “Finish the row”.

Well, most of the time she would indeed draw. But instead of matching traps, she would draw a massive jewel haul!

It was a great run of games and silly fun, which is always the goal of a chill games day. And even though I have played on Board Game Arena for a while, it still surprises me how easy games like this are to play.

Without having to do any shuffling, setup or in-game tidy up, games are so quick to play. You can almost finish a game of Incan Gold on Board Game Arena by the time you set up a physical version.

I still love playing physical games on the table, but Board Game Arena makes sense for a lot of games. And Incan Gold is definitely one of these games, especially when players are physically apart.

What better way to start a low brain game day than Incan Gold. Explore or go back, that’s all you have to do.

OK sure, if you want to get technical you can try and remember what people got in previous rounds. Hidden scores until the end of the game and all that. Card counting and draw odds can be a part of it. But only if you want it to. Incan Gold is just a fun game.

There were two distinct events that happened today that put a smile on my face. One was I got away with two artifacts on a single turn, and Rabbit and Alpal both got trapped by rock pushing on. Not unique on its own, but rare that two artifacts are on the table and we don’t mess with each other.

The other I will remember for some time to come. Alpal did her normal push strategy and had a huge early lead. Alpal has two scoring modes in Incan Gold – Huge or Nothing.

I figured Rabbit and I would be fighting for second place, as is usual in such situations. But then in one run, Alpal and Rabbit just kept going deeper into the temple. So deep, that Alpal pulled out before Rabbit did. This on its own would make the round memorable.

But then Rabbit kept going.

Rabbit ended up with an amazing 34 gems in a single run and managed to bank them in. This was also the last run of the game. This huge effort not only tied Rabbit and Alpal on points, but Rabbit came out on top having more artifacts. It was the first time I ever got to see Incan Gold’s tiebreaker in action!

If we ever get back to having people over regularly, I may look to add a physical copy of Incan Gold to the collection. But I need to make some holes in the current collection first.