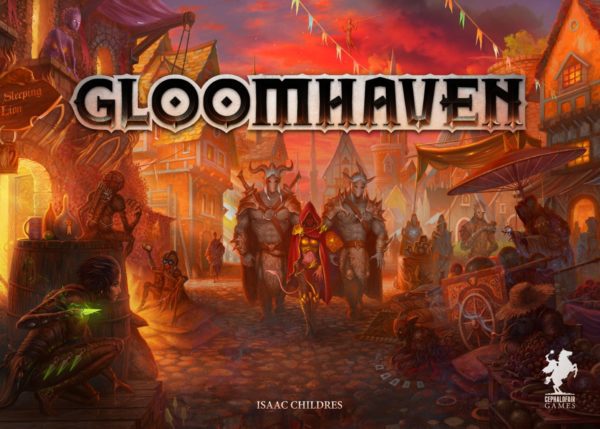 Gloomhaven is a game of Euro-inspired tactical combat in a persistent world of shifting motives. Players will take on the role of a wandering adventurer with their own special set of skills and their own reasons for traveling to this dark corner of the world. Players must work together out of necessity to clear out menacing dungeons and forgotten ruins. In the process, they will enhance their abilities with experience and loot, discover new locations to explore and plunder, and expand an ever-branching story fueled by the decisions they make.

This is a game with a persistent and changing world that is ideally played over many game sessions. After a scenario, players will make decisions on what to do, which will determine how the story continues, kind of like a “Choose Your Own Adventure” book. Playing through a scenario is a cooperative affair where players will fight against automated monsters using an innovative card system to determine the order of play and what a player does on their turn.

Each turn, a player chooses two cards to play out of their hand. The number on the top card determines their initiative for the round. Each card also has a top and bottom power, and when it is a player’s turn in the initiative order, they determine whether to use the top power of one card and the bottom power of the other, or vice-versa. Players must be careful, though, because over time they will permanently lose cards from their hands. If they take too long to clear a dungeon, they may end up exhausted and be forced to retreat.

Expanding on Legacy and Campaign games, I have wanted to play Gloomhaven for years now. I have the original game and the ‘tutorial’ stand-alone Jaws of the Lion. I started playing Jaws of the Lion with Simon and Rabbit. The campaign died off a bit and I don’t think we will be returning to it, unfortunately.

That doesn’t mean I can’t play Gloomhaven though. I jumped onto the digital implementation in Early Access, and it’s been sitting in my Steam library ever since. Not only has the full original campaign been implemented, but Jaws of the Lion is DLC coming out soon. I can play all Gloomhaven with zero setups and tear down, whenever I want.

In preparation for this, I played all of the tutorials included in the digital Gloomhaven.

I haven’t put any of these in my ‘plays’ as they are small learning scenarios. This has been a good way to come to grips with the digital implementation, and try and find how everything works together. And on the whole, it works well.

Having played the first few scenarios of Gloomhaven: Jaws of the Lion, the digital tutorials feel a little light. Not in content or information passed on. The tutorials are specific scenarios with ‘get out of this’ objectives. It works for teaching you the game but doesn’t make me excited to play. Not on their own, anyway.

There is the danger I am going into Gloomhaven Digital with unreasonable expectations. When I first played in Early Access, you needed to know how to play Gloomhaven already. There weren’t any tutorials or the like attached, just random encounters. I have watched Gloomhaven evolve from these days. I still have a feeling that the digital implementation is for people that already know the game.

Let’s see how that goes in three weeks.