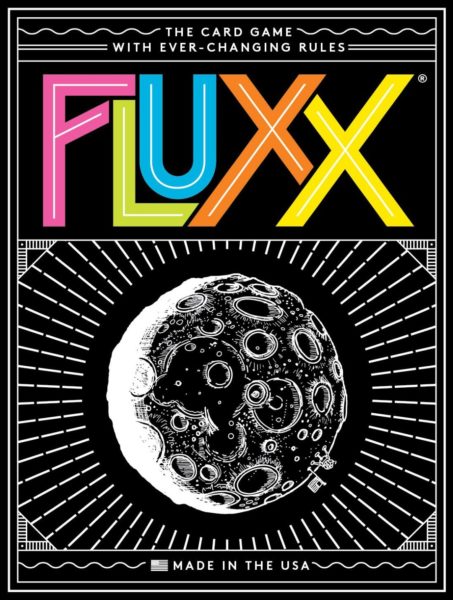 Fluxx is a game with a lot of cards, and a lot of rules. The catch is first time players can shuffle the cards and deal, and learn as you go. No detailed rules explanations required!

How is this achieved? A good percentage of the card deck are the rules, allowable actions and win objectives. Until a player plays one of these cards, the rule isn't in effect.

A game can be two minutes or half an hour - it all depends on how the cards come into play. The only constant - you and your friends will be having fun messing with each other the entire time!

I have owned a few versions of Fluxx over the years. One specific version I still need to play is Fluxx: The Board Game. One day I will get this to the table.

While I was looking at a quick game to play on Board Game Arena, Star Fluxx appeared as an option. I floated playing Fluxx to Alpal and Rabbit, and both were keen to give it a try.

We had all played Fluxx before in differing flavours, and it felt like the right amount of chaos to end the day.

The goal of Fluxx is to have Keeper cards in front of you that match the Objective. You start by drawing a card, then playing a card. It is all simple and straightforward. At first, anyway.

You see the vague Objective description is deliberate. You don’t know what the objective is until someone plays it, and other cards can change this at any time.

Every rule has a similar override somewhere in the deck. Draw 4 cards, Play all but 1 card, hand size limits and other allowable actions all get added and removed as you play. Fluxx as a game title makes a lot of sense, doesn’t it?

Shares something with another popular chaotic card game, Munchkin. That shared bond is that the game is not for everyone. A game with random rule interactions can cause unease or conflict around the table. Fluxx is a lot more forgiving in this sense, but I have seen enough players argue to throw up the caution.

The problem is for most people, the only way they will know if they will enjoy Fluxx is to play the game. When introducing people to Fluxx, I will usually play with 2-3 new players, and take the game very easy. I let the players come to grips with the flow of the game on their own, and avoid playing anything with a ‘take that’ element if I can.

This isn’t to take it easy on new players and try to lull them into bigger games. I play Fluxx this way because there is enough to try and follow with the changing rules as it is. Adding direct player shenanigans is often that final straw that sours a new players experience.