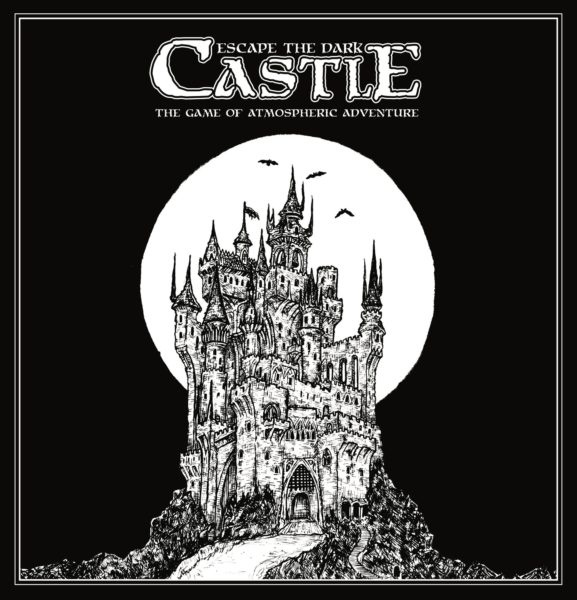 Escape the Dark Castle is a simple, fantasy adventure game for 1-4 players, with a focus on atmosphere, storytelling and player cooperation– perfect for newcomers to tabletop gaming. It takes 2 minutes to set up, lasts around 30 minutes, and no two games are ever the same.

Players take the roles of prisoners on a quest to Escape the Dark Castle, and must work together to overcome its many horrors, traps, and challenges - each of which is represented by a large, beautifully illustrated chapter card.

As these immersive chapter cards are revealed one by one, the game takes on the form of a shared storybook experience, with the players making decisions about what to do each chapter before using dice and item cards to try and keep everyone in the group alive!

Can YOU escape the dark?

I have mentioned many times that I love narrative driven adventures. When I introduced Alpal to the site via Blatherings, we recorded the two of us playing one such game. That game was Escape the Dark Castle, and it was a great time. I had actually forgotten that the playthrough actually made it to the Escape the Dark Castle: The Legend grows campaign!

There have been many plans involving Escape the Dark Castle that haven’t quite come to pass. The audio playthrough in the Blatherings I have taken off the web. I was going to play with a digital proof of concept, but time hasn’t been kind. There were even streaming plans for campaign runs due to its simple design.

So unfortunately the game has been sitting on my shelf for a couple of years. That changed this week, as Rabbit and I went on a couple of adventures!

Escape the Dark Castle is pretty simple. Each player selects a character to play. Each character has their unique die, with specialties shown by skill symbols being more or less likely to appear. Shuffle the boss cards, and place one face down at random. Then shuffle the pile of 45 chapter cards, and place 15 face down on top of the boss card. Finally, up the starter card on top of the pile.

That’s it. You now have a dungeon ready to explore! Well, thematically you have a dungeon ready to escape from, but you get the idea. Replayability is pretty high, as you don’t use all of the chapters or bosses at once. There are expansions available from Themeborne. These add new characters, bosses, chapters and even starting cards. The expansions are there for even more variety, and you don’t need them to start playing.

Escape the Dark Castle is a fun time. If you were to play it over and over as a primary game, even with all the expansions the basic gameplay can get very samey. This is my only ‘downside’ to it.

For people looking for more to sink their teeth into, Themeborne released Escape the Dark Sector. While it can look like a sci-fi skin to the existing formula, there are a number of improvements and changes made. Ranged and Melee combat, chapter ‘Acts’ controlling progress difficulty, and much more. Alpal and I played the base game when I got it from Kickstarter, but again it has remained on the shelf.

Well, what prompted the game of Escape the Dark Castle was I finally got around to setting up my deluxe Dark Sector. At the moment, it looks pretty in the box, but in a couple of weeks, I plan to sit down and solo a few games to cement the rules. Then I can play with Rabbit, and she can decide which version she would like to continue playing.