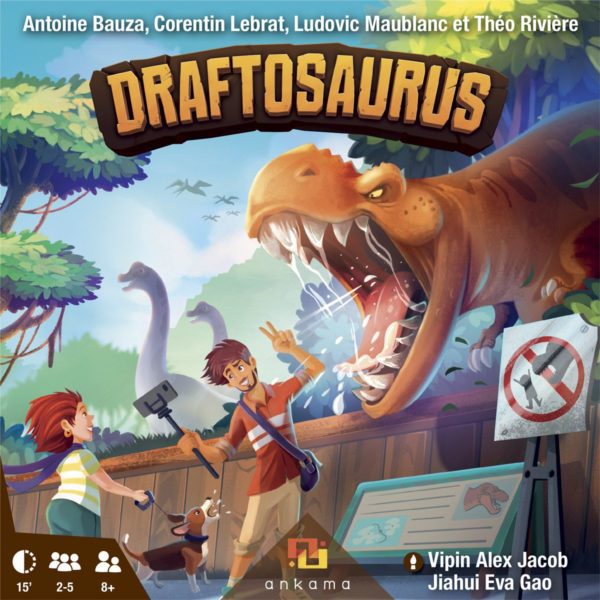 Bringing the Jurassic era alive today, this family drafting game will force you to make difficult choices like trice­ratops or diplodocus?

Pick a dinosaur meeple from your hand, place it strategically in a zone on your board so it brings you the most points at the end of the game, and pass the remaining dinosaurs in your hand to your neighbor!

One game that became a quick favourite at Alpals was Draftosaurus. Another ‘simple’ game, on the surface Draftosaurus doesn’t sound like it can be fun.

Pass little dinosaur meeples to each other and place them to maximise your score. Placement rules are set by dice roll each turn.

The description is correct, but the game comes together to be so much more fun. Alpal even had little chests to make passing handfuls of meeples easier!

When I saw Draftosaurus was available on Board Game Arena, it was another game I thought would be fun to have a go.

Being able to hover over pens and see how scoring works is great for new players. Or old players that need a reminder!

In the physical version, I always had trouble telling the T-Rex and Spinosaurus meeples apart. Apparently I wasn’t alone, as the Spinosaurus has the important note “Not a T-Rex” on the tooltip!

Until about halfway through the second game, I was missing the dice roll for placement. Each turn, the next player rolls the dice for where everyone else must place their dinosaurs.

This still happens in Board Game Arena, but I was reading the help text at the top of the screen to see what was happening.

If I had paid a little more attention, I would have seen it was next to the player’s name in the scoring area!

Draftosaurus was fun to play, and works well on Board Game Arena. You do miss the tactile nature of the meeples in digital form, but that’s how it is.

After playing with Alpal, I do miss the expansions that aren’t on Board Game Arena. I hope at least one comes to Board Game Arena soon, but the base game was still a fun session.