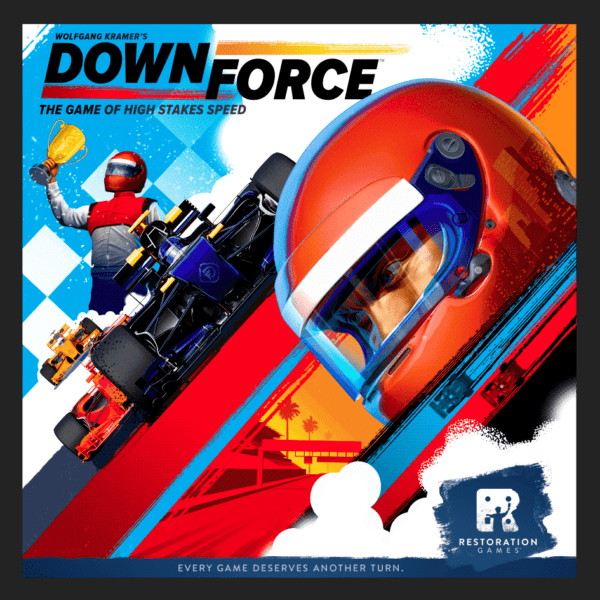 BID! RACE! WIN!
Tires screech. Gears shift. Drivers push their million-dollar cars to the limit. The difference between victory and defeat could be a single card. Downforce is our restoration of Wolfgang Kramer’s classic.

For nearly 40 years, this card-driven racing game has been the delight of gamers and families. Known by many names – Top Race, Daytona 500, Cleveland Grand Prix – we bring it to you now as Downforce.

Alpal asked the other day if we could play Downforce. How could I say no? It’s the game that made me love racing games again, and my second favourite Restoration Games title next to Stop Thief!. Simple to learn, and as strategic as you want to make it.

For example, Downforce Wild Ride adds Savanna Stretch, which blocks the track with wild animals. So if you are in the lead, you have to work harder to get around the animals. Once you have passed them, they move on further down the course and make the race easier for those behind you.

The betting in Downforce also allows some strange games at times as well. For example, we played the other Wild Ride track Aloha Sands. This adds jumps to Formula 1 racing. The jumps allow creative ways to race ahead and/or block opponents. This is of course on top of the mental image of F1 racing cars jumping off ramps!

But the first race we had I launched ahead a little bit first turn with the yellow car. Alpal decided that she wanted to make it jump, and could make it launch off 2 ramps at once. This put me massively ahead of everyone, and everyone decided yellow was going to win.

This meant everyone moved yellow and bet on it to win. Yellow had finished the race before anyone else was halfway through the race!

This might sound boring, but this is where the many layers of Downforce come into play. Just because everyone rushed my car into first doesn’t mean I was going to win. With everyone earning the same amount from betting, it becomes a game of balance. Who spent less up front and earns prizes from other positions?

We had a great time with Downforce, and I am glad Alpal suggested it. It did make me miss the physical copy though. While it was nice to have the

I do need to pull my finger out on fixing the reviews though. I can put them up (and have snuck Downforce in this week from the old site), but on the game page, they aren’t working the way I want. There will finally be a shenanigans update soon to talk about all that though.

In the meantime, play Downforce. Best recommendation I can give!