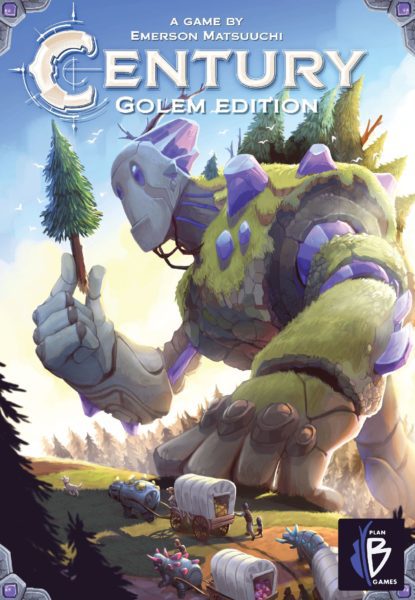 Century: Golem Edition is the beautiful sibling to Century: Spice Road - clever, smart, and even more beautiful! With manga-inspired art, the Golem Edition is a head turner with its bright colour palette and incredible components. This is one you’ll never want to put away!

Alpal put in a request for a game, that being Century: Spice Road. Century has recently come out on Board Game Arena and is a game that eternally lives in my blind spot. There is a lot to Century that makes it unique, and I remember enjoying playing it many times. But when it first came out, there was a promotional version that I wanted – Century Golem Edition.

The two games are virtually identical. The only differences are artwork and trading for gems rather than spices. That’s it. Gameplay is identical between the two versions. So why was I keen on Century Golem over Spice Road? Colour blindness. Spice road has some beautiful artwork and simple cubes represent spices. In early editions especially, the colours were muted and fairly close to each other making it hard to distinguish between.

Century Golem Edition was bright and almost ‘cartoony’, giving a different feel. Instead of painted cubes, the gems were bright plastic and shaded in a way it was easy for me to tell apart. It took a few years, but I finally have a copy of Century Golem for my shelf.

Alpal and I both knew what we were getting into, Rabbit agreed to come along for the ride. I enjoy a lot of games by Emerson Matsuuchi, but almost all his games share a common flaw. While fun, there are a lot of smaller mechanics that need to be learned to make ‘the machine’ work. This means you can’t drop a new player into a game super easily,

This meant Rabbit was behind the 8 ball so to speak most of the first game. It’s not because she can’t understand the mechanics or rules. The problem is the dump of info up front couldn’t be soaked in quick enough.

So what do you do in Century Golem? The idea is pretty simple. You collect Golems, purchased with gems that you trade and upgrade for. How you do this trading is where Century can get complicated to explain quickly. If we get to play it again, I may talk about mechanics in more detail.

What I am looking forward to doing one day is combining all three Century games into a single game. Century Spice Road and two stand-alone expansions can be combined in a variety of ways to make new experiences. As a series, this makes for a unique experience, especially at the time.

But if wish a game like Splendor had a little more ‘to it’, give Century Golem a look. Most people I play with generally really prefer one over the other, and it almost always boils down to complexity.

I don’t remember why we picked Century Golem to play this week. It’s pretty, we enjoyed it, something we hadn’t played a heap of lately. Can’t think of any better reasons!

Century as a title still makes me confused. Century is a single title that describes 3 (technically 6) games. Everything on Board Game Arena is Century Spice Road, but Golem Edition is brighter and makes me smile a lot more.

I haven’t been keeping up with the games, but the entire Century trilogy now has a ‘Golem’ variant. Not going to lie, if one of the games wasn’t out of stock I would have nabbed them Sunday. I will have to see when it comes back into stock.

Anyway – back to Century Golem! We had a lot of fun messing with gems and collecting Golems. I love Rabbit’s take on playing – just collect the Golems that she likes the look of. 🙂

The last time we played Century Golem, I already talked about most aspects of the game I wanted to draw attention to. The game is fun, there are a lot of aspects I enjoy of it, but I would like to play some more of the Century series. Especially combined. Even in just a two-player variant, I think the Century variants would make this a lot more likely.

Not because Century Golem is a better game than Century Spice Road – they are literally the same game. I just prefer the brighter Golem theme, and Rabbit seems to think along the same lines. I can’t picture her happily collecting pictures of various markets shown in Spice Road. Golems though…

Will we play Century Golem again soon? I wouldn’t have said so. But it did go down well, and we had fun this time as well. Maybe? I can’t picture Rabbit asking for it, but Alpal put it forward this time. Maybe it could happen again?