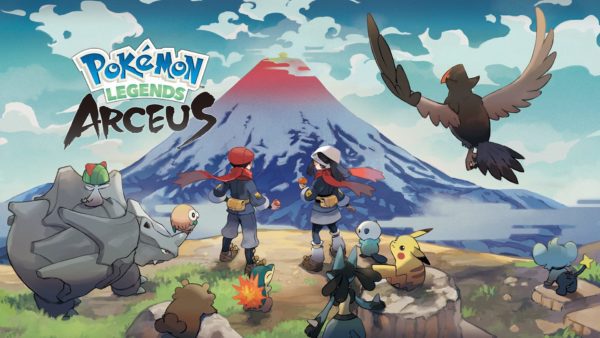 Pokemon Legends Arceus sees you building the first Pokedex of the Hisui region. In a first for the mainline games, there are two major differences to the adventures we expect.

By Tuesday, I could already tell I was going to have a week. A Platinum run of Sifu is still on the cards, but this wasn’t going to be the week to try it. And Animal Crossing New Horizons was being avoided, as chill as it is. So this opened the door for Pokemon Legends Arceus to get another look.

Monday, I had almost 9 hours of gameplay and I hadn’t tried to find the first ‘boss’ of the game. Now, I have not only defeated Kleaver, but I have two special Pokemon summons and I am making my way through a new area. I am also on 5 stars – halfway through the ranking system!

It’s been a good experience with Pokemon Legends Arceus. Personal goal wise, I not only have an Abra but I have evolved it into Kadabra. Owlsley has been fully evolved. My first Eeveelution has happened, and I am even catching Alpha Pokemon!

The first two nights all I did was explore the first area, catching Pokemon and work on my research levels. It was a good relax, nothing special game-wise. Very repetitive, but what I was looking for.

Then I wanted something a little more to do, so I took on Kleaver – the first boss. I thought this would open the next area, and I would rinse and repeat. Pokemon Legends Arceus instead opened up the next lot of gameplay options for me to look at.

To be clear, it’s not like there are a ridiculous number of different activities thrown at you. You can think of everything new offered as a kind of specialised long term side mission. These include collecting floating lights, popping balloons and scavenger hunting. All on top of the expanded side missions on offer.

The balance of ‘original’ simple gameplay and newer game elements is working for me. I was worried that Pokemon Legends Arceus would go too far in the Breath of the Wild direction. Instead, newer games such as Let’s Go Pikachu / Eevee have introduced the changes well.

Pokemon Legends Arceus is different, but not overwhelmingly so. If I spent a weekend playing only Arceus, I am sure I could not only beat it but put a large dent in Completing it. This likely won’t happen, but it does show the complexity of the game pretty well.

I decided to sit down this week and make a concerted effort to jump back into Pokemon Legends Arceus. I had bumped playing Arceus for Animal Crossing enough over the last few weeks, so I felt it was time.

The gameplay of Pokemon Legends Arceus is different and updated as mentioned before. But not at its core. It’s still the same basic RPG style game that I played years ago on my Game Boy.

This isn’t a negative. In fact, I see this as a positive for the series in a lot of ways. There are other franchises with huge hundred-hour gameplay that I don’t have time to play. Pokemon can remain more casual as far as I am concerned.

Kicking with the Switch at the end of the day, I would concentrate on catching some Pokemon and some side quests. I might look at the main quest mission, but I try to avoid triggering it until I am ready. This flexibility in Pokemon Legends Arceus is appreciated, and what makes it good to end my day with.

Near the end of the week, I had a mental flip. It wasn’t because I don’t enjoy casually exploring and catching Pokemon. I decided to power through as I had small windows of opportunity to play during the day on Friday as I waited on work.

Well, an hour later over a couple of sessions, I made my way to the final showdown.

After a huge exposition dump and another 15 minutes, I watched the credits roll. So I finished Pokemon Legends Arceus. Another game under my belt!

What I don’t have is the Pokemon of the title. To have a crack at catching Arceus, it looks like I need to complete the Pokedex.

Here is the thing – I don’t want to. I have only completed a single Pokedex in all the Pokemon games I have played. And all I had to do was catch the Pokemon, not grind out specific tasks to complete the entry!

Now I don’t have to do any of this. That’s what I appreciate about the Pokemon formula – if you want more to do, it’s there. But you don’t have to interact with the ‘busy’ tasks. Pokemon Legends Arceus has enough new things to explore, but because I don’t feel like doing it I don’t have to.

I already feel like I got my money’s worth from the game, so happy chap there. Now Rabbit can borrow my cartridge and give the new Pokemon game style a try before Scarlet and Violet come out.

For now, my Pokemon journey has come to an end. Until the new games come out.